“BOLD” Portfolio Exhibition is open to the public from April 22–29, 2022 at The Myers School of Art, Emily Davis Gallery. 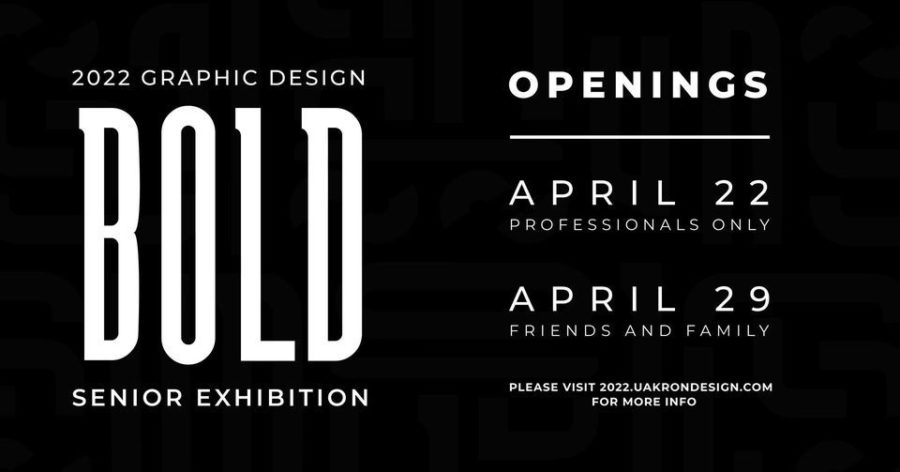 I first met graphic design major and marketing minor Kohl Spieker when I was a freshman at the University of Akron. Spieker’s skill in graphic design was immediately apparent to me, as was his kind and thoughtful nature. As Art Director for the Mary Schiller Myers School of Art’s annual Senior Portfolio Exhibition, these characteristics serve him well.

Spieker’s leadership puts many of his fellow classmates at ease. Senior year is beset with many stressors and for the graphic design majors at Myers, that holds especially true.

Spieker learned of the senior exhibition during his first year at Myers and knew immediately he wanted the lead role of Art Director.

He described the senior exhibition as a “conglomeration of all the students and their work to showcase their strengths and abilities.”

His role as Art Director includes daily email correspondence. Also, during the class period for Graphic Design Presentation, he meets with staff, different committees and team leads. He also ensures that everyone has the tools they need to put on a successful show.

In addition to his role as Art Director, Spieker is also the lead on the show’s build-out.

Spieker has a lot of responsibilities, but he knew what he was taking on.

“It’s obviously busy and a lot sometimes but I really enjoy doing it. It’s something dynamic. I like having a different role or a different job to play every single day,” he explained.

Three teams each submitted a concept for the show, and the graphic design seniors voted to select the winning concept.

The process led to an unprecedented situation: a tie between two of the three concepts. This event led to a faculty vote, but the tie still remained unbroken.

Ultimately, it was decided that both winning teams would combine their concepts.

“We already had some discussion about ideas that we liked from both of the other sections, but especially the Renaissance, as well as conceptual parallels between our ideas already. So it actually kind of made a lot of sense to combine them.”

To an observer, it may have seemed that the elements lacking in one concept was fulfilled by the other. The two combined ideas strengthened each other.

Graphic design major and illustration minor Janae Droder, one of The Buchtelite’s own, was heavily involved in combining both concepts into a new art direction and expressed appreciation and excitement with their role as the leader of the Motion Design team.

“We get to work together and come up with this new concept and we’ve never done this before,” Droder said. “ Britynn [DeWerth] and Dave [Flynn] are going to be helping us. I get to work with other people from Bold, and it was just really an exciting opportunity that I was more than happy to jump into because it’s a challenge and I love challenges!”

Although Spieker is still in the initial stages of his work as an art director, he feels that the experience is giving him a real idea of what this job entails.

“It takes a lot of responsibility. It’s a very busy job. I think mainly what I’ve learned is how to communicate with people effectively and make sure everybody is okay with what they’re doing,” Spieker said.

As for plans after college, Spieker, Vikers and Droder have impressive plans.

Spieker owns his own freelance business and already has several clients. He hopes to merge that experience with an art director role professionally.

Vickers expressed his desire to get into book publishing and has several entrepreneurial ideas. One project is a variation of a tabletop RPG.

He also stressed the importance of coming out of his shell. He noted that working as a lead on the project has given him more confidence.

Currently Droder is planning to build up work experience locally and then apply to graduate school. They expressed joy in their experience and growth at Myers.

“I figured out my style in design, I figured out my style in illustration and I’m proud of my work and my content. I’m very confident in myself now compared to where I used to be, I’m happy to speak in critiques, everything figured itself out. And I was worried for nothing. The professors have been amazing. Every professor has been way too good to me. It’s really gotten me where I am now,” Droder said.

For more information visit the creators of “BOLD” at 2022.uakrondesign.com.

Located in Folk Hall, “BOLD” will be featured in the Emily Davis Gallery. Open to the public from 10 a.m. to 5 p.m., Monday through Friday.