Age is only a number

Art comes in many forms, and Betty Russ, at the age of 84, makes her life a work of art. She currently resides off of Turkeyfoot Road in Akron. 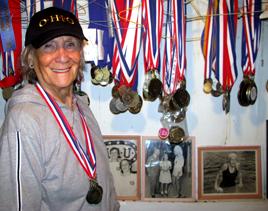 Russ, who is vibrant and energetic, found her calling at the age of 18 after she broke Firestone High School’s long distance swimming record by 55 seconds. This record-breaking time quickly made her an All-Star swimmer.

It was not long before Hollywood agents heard about Russ’s fame and adamantly attempted to scout her for movies.

“I’m not interested in movies! I’m going to the Olympics!” was Russ’s response to Hollywood’s calling.

Russ kept her promise and attempted to snag a position on the 1948 US Olympic Swim Team. Unfortunately, she was beaten out of her spot by a female swimmer from Hawaii. Disheartened and torn by defeat, Russ returned home.

Once home, Russ decided to leave swimming behind in exchange for a husband and a family, but the itch to swim still remained.

Russ’s husband died after struggling with an illness for over 10 years. In an attempt to cope with the loss of her husband, Russ returned to swimming in 1980. This return to swimming led her towards an opportunity of a lifetime.

“I was swimming at the Barberton Pool,” said Russ. “Tim Timken approached me and said, ‘Wow, you are really good!'”

This chance encounter kicked open a door of opportunity for Russ. Unbeknownst to her, Tim Timken was a founding member of the OHIO Masters Swim Club.

OHIO Masters Swim Club, established in 1972, is an organization dedicated to encouraging fitness for aging adults, as well as competitive swimming. OHIO is used as an acronym for Old Hearts Inspiring Others. The club currently has over 350 members.

Russ immediately became a member. Her first swim meet in over four decades was held in Canton.

“It had been so long since I was at a swim meet that I ended up wearing spandex and a bandana,” explained Russ. “I didn’t realize how much swimming had changed,” she added.

Russ placed first in the 50-meter, the 100-meter and the butterfly. This was proof of Russ’ talents.

“It’s my life and I love it,” said Russ, who has now been a dedicated member of the club for over 31 years.

Aside from setting world records, Russ also found time to compete in the Lake Erie two-mile swim. She has ranked No. 1 in this event for the last 17 years. Russ’s granddaughter Brooke Barnes couldn’t be more proud of her grandmother.

“She’s truly amazing and I’m glad to have such an exciting grandmother,” Barnes said.

“I never had a coach after high school,” Russ said. “I would talk to the swimmers that paid $1,500 dollars to attend a three-day swim camp at Stanford.” Russ never needed a coach; she was a born natural and her collection of medals and memorabilia is a grand display of those natural talents.

Russ’s basement is a shrine to over 1,000 first place medals, which hang brightly from the walls. There are boxes upon boxes filled with medals and merit patches. There are even pictures of Russ’s first swim meet. Russ’s daughter, Rebecca Carney, explained that her mother “was tired of receiving all those medals and wished they would have given her something else.” However, these medals did give Russ something: memories of her greatest accomplishments.

“This goes to prove that aging adults can still contribute to society and Betty Russ’ should be valued and applauded,” Psychology Major Marc Tolbert said.

Carney embraces the fact that her mother is an All-American swimmer, but what she loves the most about her mother is that she’s also an advanced skier.

“I knew she was different from most moms,” Carney explained. “How many people get to ski next to their 84-year-old mothers in New York?” Rebecca’s husband, John Carney added, “Betty is definitely one-of-a-kind.”

Adding to her athletic accomplishments, Russ is also an artist.

She recalls that it all began with sketching the Sunday cartoons as a child, which eventually led to colored pencils and paint. Russ’s passion for art didn’t stop there. This passion led Russ towards music, which encouraged her to take music lessons. Russ quickly became skilled in piano and the violin. These newly founded musical skills also encouraged and helped her fine tune her singing abilities.

These artistic abilities and interests have made Russ’s home a true art gallery experience.

The walk toward her front door is an adventure for the eyes. There are mini-disco balls dangling from trees, sidewalk paintings and animal print benches. No matter which direction you look, there is art everywhere.

Once inside her home, there is sense of wonder. There are brightly colored glass beads and pieces of broken mirror glued to her bathroom ceiling. The stairways are covered with painted flowers and every wall displays a piece of painted art.

Russ’s talents are expanded even more by her poetry writing. Over the last several decades, Russ has written so much poetry that her home is filled with boxes of it.

“There are days when it just comes to me and I can’t write it fast enough,” Russ said.

The interesting part about Russ’s passion for art is that she can use just about anything to make it. There are wooden spools that have been converted to footstools.

“I just get them from the electric company,” Russ explained. These footstools often become gifts for her friends and family.

Russ’ newest fascination is glass art. She stumbled upon the medium at a flea market. The vendors selling glass art had a box of broken glass under the table. Russ asked, “Hey, what are you going to do with that box of broken glass?” The vendor had intended to throw it away, but Russ quickly snatched up the box and headed home. She wasn’t sure what she was going to do with it, but she did know it was going to become art.

It was while driving that Russ came across an abandoned window frame that gave her the form for her new glass fascination. She quickly rushed home to begin gluing the broken glass to the frame. These window frames became a vibrant array of colorful beauty.

These beautifully crafted window frames are hanging all over Russ’s home and each one is different from any other.

“Life has been a joy,” Russ added.