Eagles soar past Zips, 31-23 for fourth loss of the season

Despite a second-half touchdown run and pass by running back Jawon Chisholm, The University of Akron football team fell to Eastern Michigan 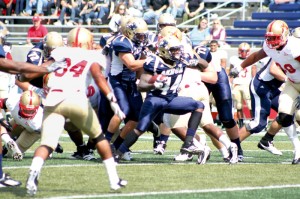 Chisholm’s third straight 100-yard day was not enough for the Zips to pull of what could have been their first road victory in nearly three years.

A fast start for the Eagles put the Zips in an early hole, which proved to be too much for Head Coach Rob Ianello’s team to overcome.

EMU running back Dominique White scored from 14 yards out, capping off a nine-play 50 yard drive with 4:56 left in the first quarter. White found the endzone for the second time on the day with 13:41 left in the second quarter, making the score 14-0, completing an 84-yard drive with a one-yard run.

Akron responded to the two touchdown deficit with a score of their own, as quarterback Clayton Moore found wide receiver Keith Sconiers on a 36-yard strike. The one-play drive came after a fumble by Eastern Michigan quarterback Alex Gillett forced by Akron defensive end John Griggs.

Kicker T.J. Marchese knocked in a 29-yard field goal with just under two minutes in the half to make the score 14-10, but Eastern Michigan responded with a last-second field goal of their own to make the halftime score 17-10.

Eastern Michigan scored on its first drive of the second half, as White pounded his way in from two yards out to give the Eagles another two-touchdown lead.

UA came back later in the third quarter with a trick play for a score, as Chisholm found Moore from eight yards out with 3:09 left. A missed extra point made the score 24-16.

Gillett once again pushed the lead to two possessions with a four-yard touchdown run as the clock hit 12:43 in the fourth quarter.

Chisholm’s late score gave Akron a chance to tie the game in their final possession, but a turnover on downs followed by a couple of EMU kneel downs sealed the victory for the Eagles.

Chisholm finished the day with 122 yards on 25 carries, bringing his season total to 532 yards on the ground.

Sconiers’s touchdown catch was his fourth of the season as he pulled in five balls for 81 yards.

Moore completed 14 of 28 passes for 155 yards and a touchdown to go with his touchdown reception.

Highlighting the defense was linebacker Brian Wagner, who compiled 17 tackles and the forced the second quarter fumble.

The Zips and Eagles played fairly evenly in terms of yardage, as UA gained 302 yards on the day to EMU’s 322.

Akron will play its last non-league game of the season this Saturday as Florida International comes to InfoCision Stadium at 2 p.m.