The Akron women’s soccer team will hit the road again this weekend for what may be their toughest road trip of the season.

Akron comes off a weekend with which they finished 1-1. The weekend resulted in Akron being bumped off the top of the standings by the Ohio 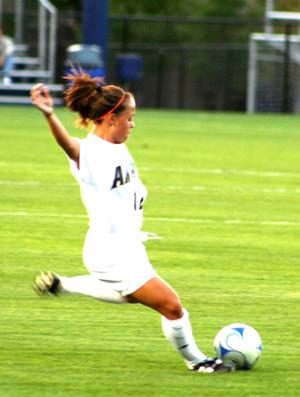 Bobcats, who now own a 3-1-1 Mid-American Conference record.

Toledo, for example, has only given up two goals in their last four games. The two came against Western Michigan, whom they defeated 3-2 at Kalamazoo.  The other Zip opponent, Ball State, has given up four goals, but has accumulated two shutouts so far in the MAC.

Ball State, who UA will play on Friday, has capitalized with two goal scorers in particular in freshman defender Jasmine Moses and junior forward Brigit Reder. Moses scored most of her five goals against out-of-conference opponents, though she tacked on one against Miami (OH) last weekend. The same goes for Reder, who has her lone conference goal against Miami (OH).

During conference play, the Cardinals have relied on a team effort to score their goals. BSU has had seven different players score for them so far. The game is scheduled to start at 4 p.m.

Akron will then travel to Toledo’s Scott Park on Sunday for their sixth MAC match. Toledo, who has started the MAC season undefeated, will first play Ohio on Friday.

Toledo has shown to be a triple threat in sophomore Rachel MacLeod, forward Kirsten Lynn and sophomore forward Nicole Gyurgyik. Combined, the three have accumulated 17 goals. However, two in particular, MacLeod and Gyurgyik, have really taken over the scoring so far against MAC competition.

MacLeod has scored three goals in her last four games played. Gyurgyik scored a goal each in her first two games.

Akron will compete in a very big weekend, after which they will return home for games against Bowling Green and Miami on Friday at 7:30 p.m. and Sunday at 1 p.m., respectively.