Painting science into the landscape: topography and art combine in UA parking lot 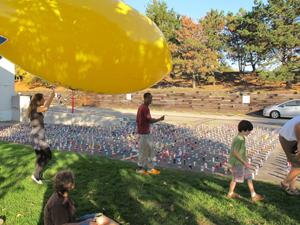 This weekend, the parking lot of Folk Hall was closed for painting, but not for touching up parking spaces or filling in potholes.

According to painting professor Matthew Kolodziej, the Synapse Project, which started in 2007, is a collaboration between art and science.  The project explores issues that touch on both disciplines and is open to not only all members of the University, but also to the general public.

Synapse has featured the work of artists such as Diana Cooper, Adelaide Paul, Alice Aycock and Marius Watz, and has worked with subjects like hybridology, artificial intelligence, paradigms, cybernetics and many more. This weekend’s project explored the dynamics of a watershed and the volumes of water that pass through individual storm drains.

Most parking lots are inadvertently built as watersheds, or areas from which precipitation can flow from a large surface into a single stream or a 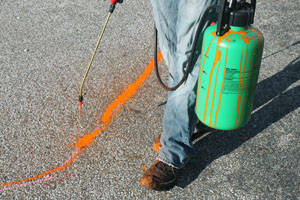 number of streams. The problem with this is that the runoff often mixes with the canal systems, creeks, sewer systems and other places where it shouldn’t be.

For over a year, Webb had been planning the project with Hartman, who is completing her sabbatical in Akron. Friday was the first day of actual work. Student volunteers from the Akron Engineering program and the Surveying and Mapping program in Summit College, led by the American Society of Civil Engineers, came to survey the land that evening. They used electronic equipment to calculate and mark the positions of each six-inch drop in elevation. In total, there was about an eight-foot difference in the total elevation throughout the entire lot.

Work continued early on Saturday morning, accompanied by coffee and doughnuts. A varied mix of volunteers showed up, including members of Environmental Akron, Engineering students, students from the Myer’s School of Art and various community members.

One of the students working on Saturday was Eric Elmond, Biochemical Engineering student and member of Environmental Akron.

“I didn’t know what I was getting into when I got here, but that’s what makes things interesting,” Elmond said. He is hoping that more Synapse projects will run in the near future, despite the fact that his shoes and clothing are now covered in a thick layer of orange paint. 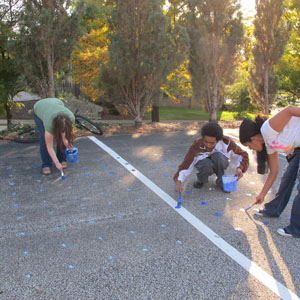 The first step in the actual drawing of the piece was to trace every six-inch elevation on the lot. This was done by spraying non-toxic, neon orange paint on the marks previously made by engineering students in a process that was similar to painting yard lines on a sports field.

Once the lot had been mapped out with the orange paint, blue dots of paint were sprayed down in a similar fashion. These represented how the water moved into the lower-elevation areas, and created a template for the final part of the set-up. This final part used recycled soda cans to represent the water flow. The cans were filled partially with water to keep them from rolling away too soon, and arranged in careful lines on top of the blue dots.

The next step, of course, was to execute the piece. In terms of art, this would probably be classified as a site-specific performance piece, as it only lasted for a short amount of time and would not be the same anywhere else. This ephemeral piece of art will wash away with the next rainstorm.

Webb and Hartman knew it was important to record from above, as the piece is best viewed in its entirety and as a map. Therefore, they had to find a way to suspend a camera in the air high enough to get a decent amount of the parking lot in the picture.

Fortunately, The University of Akron owns a small blimp for that very purpose. Heath Garris, PhD student of integrated bioscience, was in charge of running the blimp, which hung in the air with a camera attached to it. The camera had a remote control so Garris could keep the picture focused on the project while the blimp floated around.

Once the blimp was ready to go, the performance began. This part focused on the section of the parking lot that runs down into the loading garage. 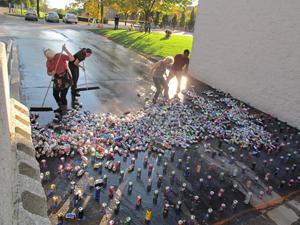 Three volunteers with push brooms began to sweep the cans down into the garage area. At first, the cans fell easily, and the water slowly trickled out of them. But as the performance continued and more cans accumulated, the volunteers had to work much harder to push the large piles of cans down the pavement, and water and cans were flying everywhere.

This alluded to the out-of-control aspect of the way that the runoff water accumulates and infiltrates other water sources. The volunteers pushing the cans illustrated the intense efforts we must put forth to eliminate these issues and how the longer we let the problem grow, the more difficult it will be to resolve it.

In the end, all that was left was an enormous pile of cans in the lowest corner of the loading area and a lot of water. The blue dots had been washed away, as had the orange lines. Nevertheless, the cans remained. The mere use of cans shows a contrast between waste and renewal, as aluminum is one of the foremost recycled materials.

One of the only issues that arose during the making and execution of the watershed project was a lack of volunteers and a lack of knowledge about the piece. Synapse has certainly been growing, but one problem is getting people, especially students, to work on these sorts of projects.

“Scientists have all of these really cool things, but they don’t know how to tell you about them,” Nichole Houze, president of Environmental Akron, said. “Art could really help bridge that gap.”