The University of Akron volleyball team hosted Ohio University Friday at the JAR, falling in straight sets 22-25, 16-25, and 20-25. 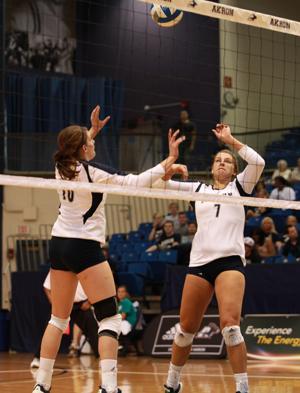 “We competed well, controlling our attitude and effort while staying positive in our attitude while having a fighting attitude,” Akron Head Coach Ron Arenz said. “The way we competed against this caliber of team is something that I am very happy with and pleased with.”

In front of a large homecoming crowd Saturday, UA defeated their rivals from Kent State University in straight sets, 25-15, 25-13 and 25-23, earning their first conference win. Along with this win, the Lady Zips snapped a nine-set losing streak and an 11-match losing streak.

“The win gives the team confidence and a reward for how much work and effort the team has put in and being diligent in their training,” Arenz said. “The team is still going and getting better. Their confidence and composure really showed in the third set.”

Notable players during the match were Jarvis, who led the Zips with 13 kills and a hitting percentage of .400, Twitty, who added nine blocks (eight assisted, one solo) and four kills and Morgan Kuhn, a junior, who contributed 38 assists and nine digs.