Twitty named to Defensive Player of the Week honors 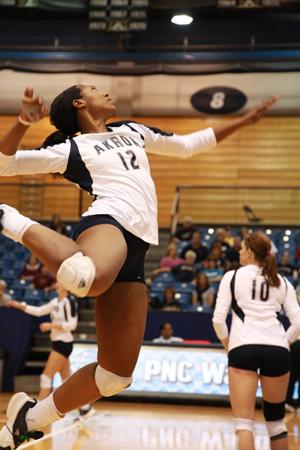 On Monday The University of Akron’s Paiton Twitty of the volleyball team was named Mid-American Conference East Division Player of the Week.

The Toledo native, and junior middle blocker recorded a career-high eight kills hitting .357, while recording 2.0 total blocks of which was solo and 10.5 points for that match against Ohio this past Friday.

This past Saturday against Kent State Twitty not only helped the Zip get their first MAC win of the season but also Twitty brought here defensive play to the game with 9.0 blocks, while posting four kills and finishing with 9.0 points.

As for the Zips and their win versus Kent State take the lead in the PNC Wagon Wheel Challenge, earning half of a point for Akron in the completion between the two.

On the season Twitty has a total of 42 kills in 16 games played.

In Twitty’s first two seasons at Akron she has had a total of 66 kills, while only starting in 19 matches out of the 46 games she played in.

While at Roy C. Start High School, Twitty was a four-time letterwinner and scholar athlete. In 2008 Twitty was named first team all-city  squan and second team all district. She also was a member of the National Honor Society.

Both the Zips and the Flashes will meet again at Kent State on Nov. 11 for the series conclusion and a sweep to gain another half point.

Each of the 15 varsity sports included in the competition will be worth one point. In order for a school to be the winner of the challenge, they must record at least eight points.

The point is awarded to the team that wins the season series in the head-to-head competition. Since the teams meet twice in the regular season for volleyball, each win is worth a one-half point.

Akron will round up their four-match homestand this Friday when they take on Northern Illinois on Friday at 7 p.m. and then Western Michigan on Saturday at 5 p.m. Saturday’s match will feature UA’s annual Dig for a Cure fundraiser.