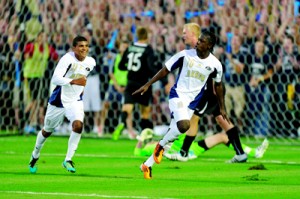 On Saturday night, the No. 4 University of Akron men’s soccer team defeated the Saint Louis Bilikens, 4-0, at Herman Stadium.

The Zips improved to 3-0-1 on the season as the Bilikens (1-3-0) were shut out for the first time this season.

“I thought it was a solid and efficient win,” UA Head Coach Caleb Porter said. “It still could be better, that’s the scary thing, but this team showed what they’re capable of doing.

UA, who dominated possession mostly throughout the match, owned a 21-4 shot advantage along with a 13-2 margin on goal.

Junior midfielder Scott Caldwell had an impressive game, recording three assists and one goal. The unassisted goal by Caldwell was his third of the season.

Akron took the 1-0 lead in the 21st minute, after freshman defender DeAndre Yedlin’s run, which resulted in sophomore defender Aodhan Quinn’s corner kick that went into the box. After a soft touch from Caldwell, senior defender Matt Dagilis punched the ball into the back of the net from six yards out.

“Matt did a great job,” said Porter. “[Bryan] Gallego got red carded and [Dagilis] came in and really hasn’t played a lot — he’s been behind Zarek Valentin — but yet he’s stayed sharp and he’s still continued to get better. He’s a guy who brings it every day and he was ready for this moment; he showed it today.”

An Akron native, Dagilis made his first start in over a year, while recording his first goal since the 2008 season in the 21st minute of the game. Dagilis started in place of freshman defender Gallego, who had to sit out a game due to drawing a red card in a 2-1 double overtime victory against Cal State Northridge Sept. 3.

Sophomore forward Darren Mattocks jump-started the Zips offense in the second half when he scored his fourth goal of the season in the 59th minute. Mattocks took a pass from Caldwell and then slotted the keeper from the top of the box.

Saint Louis continued to push forward in an attempt to cut into the lead, but was burned late when Akron scored back-to-back goals in a span of 51 seconds.

The third goal of the night came from Caldwell in the 82nd minute, where he tucked the ball in the upper right corner of the net. Seconds later, Caldwell added his third assist of the game, passing the ball to freshman midfielder Akeil Barrett on the right side of the box for Barrett’s second goal of the season.

Saturday’s win was Porter’s 93rd career victory and improved his record to 61-0-0 when leading at the half.

On a side note, Akron has only been defeated just once in its last 28 regular-season road and neutral site matches (23-1-4).

The Zips return home this Friday, where they will host The University of Akron Tournament this weekend. Akron will face New Mexico Friday at 7 p.m. in a game that will be broadcast on FOX Soccer Channel.

The Zips will wrap up the tournament on Sunday when they take on Cal Poly at 6 p.m. Both games will be played at First Energy Stadium-Cub Cadet Field.