Zips to host Huskies and Broncos 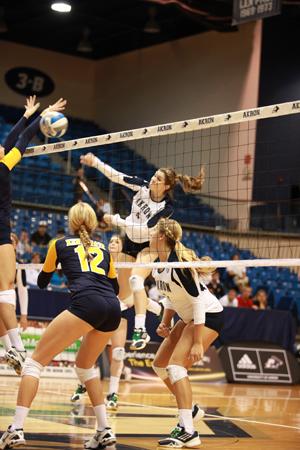 The Zips volleyball team will host the Huskies of Northern Illinois University on Friday and the Broncos of Western Michigan University Saturday at the JAR during this weekend’s Dig for a Cure.

“I’m expecting our team to compete for every point and put up a great fight,” said Akron Head Coach Ron Arenz of this weekend’s matches. “The goal is to improve our W-L record and continue to increase our level of play in every area of the game.

“I always emphasize that we are our own greatest challenge. If we are able to execute to the best of out ability, then our weakness becomes our strength,” Arenz said.

Notable players for the Zips will be senior Courtney Jarvis, who has recorded 205 kills, a .206 hitting percentage and 137 digs. Jarvis is also leading the Zips with points scored at 225, which averages out to 3.4 points per set.

The Huskies, coached by Ray Gooden, are 15-5 overall and 4-2 in conference play, losing to Ball State and Eastern Michigan earlier in the month. The Huskies will be coming to the JAR Friday with on a three-game winning streak and a 6-1 away record.

Notable players for the Huskies are Allison McGlaughlin, who has 199 kills and a .213 hitting percentage; Lauren Wicinski, who averages 5.71 kills per set for a total of 388 kills for the season; Kristin Hoffman, who adds 847 assists to the team; and Mary Kurisch with 63 blocks (19 solo and 44 assisted).

Western Michigan comes to the JAR Saturday after facing Buffalo. The Broncos are coached by Colleen Munson, who brings a record of 14-5 overall and a conference record of 4-2, with losses coming against Ball State and Northern Illinois earlier this month. The Broncos have a one-game winning streak and hold a 3-3 away record.