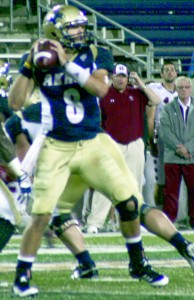 Rob Ianello and The University of Akron football team will have to wait at least another week to get their first win of the 2011 season.

A 41-3 thumping by Temple Saturday night coupled with a 79-minute weather delay added to a forgettable start of the season for the Zips.

“I thought we started the game well. I think we had a good plan on both sides of the ball,” Ianello said. “Obviously their team handled the delay much better than our team.”

A pause in the action, due to lightning, proved to be the only thing that could hold back the Owls’ high-powered offense. With 6:04 left in the first quarter, the lightning struck, forcing players and fans inside the stadium, but it was Temple’s offense that struck quickly and often after the game resumed. 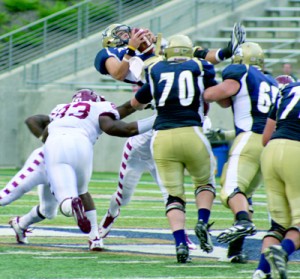 Unfortunately for the Zips, the points scored from Marchese’s first career field goal were their only points of the game.

The second quarter became “The Bernard Pierce Show,” as he scampered for runs of three, two and 48 yards, all for touchdowns, the first of which was set up by a fumble by Clayton Moore on Akron’s own four-yard line.

“Probably one of the biggest turning points of the game was when Clayton was hit,” Ianello said.

The Zips went into halftime down 28-3.

A struggling Akron offense, two field goals by Temple’s Brandon McManus and a late touchdown run by the Owls’ Kenny Harper made the final score 41-3.

“Obviously it’s not the type of performance we’re looking for in our first conference game,” Ianello said. “There’s a bunch of things we can do better on offense, defense and special teams.”

The Zips went three of 14 on third down conversions, committed eight penalties for 60 yards and turned the ball over twice, but maybe the most glaring statistic in the game was the difference in the teams’ rushing attacks.

The Owls running game was led by Pierce, who ran for 150 yards on 18 carries and the three second-quarter scores.

Moore, making his second career start, completed 12 of 26 passes for 192 yards and an interception.

“I still believe we’re going to be a very good football team. Clearly we have a lot of work to do,” Ianello said.