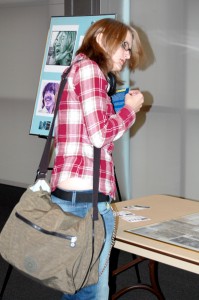 It has been over 47 years since The Beatles first stepped foot on American soil. Last Wednesday, The Beatles were able to make their debut at The University of Akron thanks to Dave Schwenson, who brought his stash of rare Beatles memorabilia to share with students.

Schwenson’s career began in 1994 as a talent representative and an entertainment consultant in Calif. working mainly alongside comedians. After Schwensen’s long stint in the Hollywood biz, he moved back to his roots in Ohio to write stories and columns for newspapers.

While working on what would become his third book, Schwenson wanted to stray away from comedy and decided on the topic of The Beatles; however, he would not be writing just another biography. This new work would tell the stories of the infamous ’64 and ’66 concerts here Cleveland, Ohio.

The book, “The Beatles In Cleveland: Memories, Facts & Photos About the Notorious 1964 & 1966 Concerts” focuses on these two concerts because Schwensen wanted to write about something he experienced as a young boy. At the age of 13, his parents took him to one of The Beatles shows held in Cleveland during the 60’s. From his memory of the concert, he knew this book would revive memories not only for him, but for the nation that lived through Beatlesmania.

After “The Beatles In Cleveland” was published in 2007, it landed on numerous bestseller lists, including both the national Top Forty on Amazon.com for Biographies & Memoirs and Composers & Musicians and the No. 1 position for items sold in Northern Ohio.

Soon after word began to spread of the book, Schwensen began to receive invitations to colleges and Beatlesfest to give talks. He quickly developed a presentation to go along with his speeches, including rare photos and videos and memorabilia that he has collected over the years.

Some of the memorabilia consists of photos of The Beatles sitting on a zebra-striped couch in their dressing room backstage before their ’64 and ’66 concerts began. Schwensen was lucky enough to find the original dressing room and discovered that nothing had changed, not even the wallpaper.

“I loved that Dave went to the dressing room and sat on the same couch as The Beatles did; that was real cool to see,” said sophomore Christian George, who attended the Beatlesmania event.

Also present in the memorabilia were newspaper articles Schwensen saved as a young boy, a book report for school done about The Beatles sent to him from a woman to add to his collection, a journal sent to him by another woman which talks about going to the 1964 concert and seeing The Beatles and lastly rare footage of the ’64 and ’66 concerts in Cleveland, unseen by almost anybody.

The films show both concerts from start to finish, except for the 1964 concert, where The Beatles were forced to stop halfway through their set so that the police could handle the waves of screaming fans rushing the stage. The Beatles were banned from Cleveland after that, but returned in 1966 to give a full-length concert.

“The 1964 concert, I was there! I was in the balcony, third row, middle seat,” Mary Collins said, a non-traditional student at The University of Akron. “It’s fun to reminisce on everything that I witnessed back in ’64 today in 2011.”

“When I began watching the footage I’ve collected over the years for this book, I realized just how young The Beatles were when they started, it was surreal to see teenagers cause the chaos they did,” Schwensen said.

His own favorite piece of memorabilia is the 1964 concert footage shown at these presentations. It was discovered in October and only three people have access to the footage.

Unfortunately, Schwensen has yet to be able to meet either of the surviving Beatles, but he has been able to conduct some interviews with people who worked close to the band.

“The Beatles made a huge impression on the people who worked close with them, and I’ve interviewed them because they all have such a vivid memory of everything that went on,” Schwensen said.

Schwensen wanted to create a book that anybody could pick up and be interested in.

“People come out to see The Beatles, not me — that is what draws in the crowds, being able to see unseen footage is what hooks them,” Schwensen said. “The Beatles created something that is so great it continues on after they are done.”