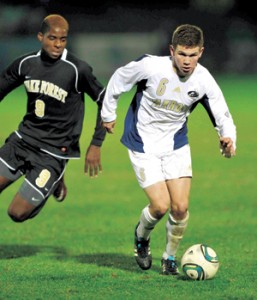 With four minutes left to play in regulation, freshman Sam Fink of Wake Forest (8-6-3) netted the game-tying goal against the No. 7 University of Akron men’s soccer team on Saturday night at First Energy Stadium-Cub Cadet Field.

The goal by Fink resulted into two scoreless overtimes despite the Zips (12-2-3) having opportunities to score. Akron’s attempts were turned away by Wake Forest goalkeeper Michael Lischm, who had six saves. Akron out-shot the Demon Deacons 6-1 in both overtimes.

“I’m proud of our performance tonight,” UA Head Coach Caleb Porter said. “I thought we deserved better. I thought we did enough to win the game.”

Junior midfielder Thomas Schmitt came off the bench in the first half and put the Zips on the board in the 40th minute, giving UA a 1-0 lead. Junior midfielder Scott Caldwell was credited on the assist.

Caldwell, who sent the ball over to Schmitt on a corner kick, first got the ball deflected off a wall of Wake Forest defenders, but Schmitt was able to collect the ball and send it straight past Lischm. The goal by Schmitt was his fifth on the season and his second straight in the past two games.

The Demon Deacons, however, answered back in the 65th minute after Sean Okoli received a pass from Ben Newnam.

“That was an NCAA Tournament-type soccer game,” Porter said. “We knew going into it that this would be a measuring stick for us, and that it would be great preparation going into the postseason.”

Akron answered back in the 75th minute after sophomore midfielder Reinaldo Brenes scored his first career goal off a header from a Caldwell corner kick.

“I thought our guys rose to the challenge,” Porter said. “They did everything I asked them to do. They followed the game plan. I thought they fought hard. We scored two great goals. The only disappointing part is that we gave up a couple of soft goals.”

In the 56th minute, sophomore Eric Stevenson nearly put UA up 2-0, but was unsuccessful after Stevenson’s shot skipped just inside the far post from the left flank. Lisch made a diving save to deny Stevenson.

Finishing the game, the Zips had a total of 20 shots compared to Wake Forest’s 10. Akron also won the shots on goal category, recording eight against the Demon Deacons’ six.

The Demon Deacons entered Saturday’s game on a two-game winning streak with wins over NC State (5-2) and William & Mary (1-0).

Wake Forest is the first Atlantic Coast Conference team to play at Akron since 1993.

Overall, the Demon Deacons, who this season played nine of their first 10 matches at home, are 1-2-2 on the road this season.

With the tie, the Zips extend their NCAA home-unbeaten streak to 48 matches.

Seniors Matt Dagilis, Luke Holmes and Michael Balogun were recognized before the start of the game for Senior Night.  Dagilis and Balogun started the game, while Holmes came off the bench, recording 27 minutes of playing time.

The Zips will return to action this Wednesday when they take on Big Ten opponent Michigan State at 7:30 p.m. at Frist Energy Stadium-Cub Cadet Field.