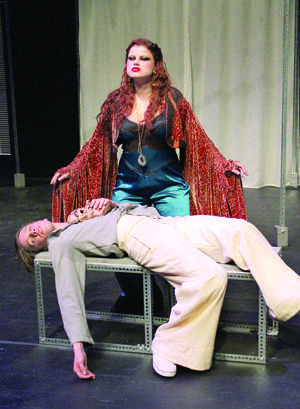 “The Great God Brown” by Eugene O’Neill opens tonight at The University of Akron’s Sandefur Theatre in Guzzetta Hall.

“The Great God Brown” is the second part of UA’s Dionysos Project, a three-year exploration of the Dionysos myth in performance. Last year’s UA production of “A Mouthful of Birds” was the first play in the project.

“The Great God Brown” was written in 1926. According to Slowiak, the play draws inspiration from “Jungian psychology, Nietzschean philosophy, Greek myth and Asian and Christian religious sources.”

According to Slowiak, his pursuit as a theater researcher was inspired by Euripides’ “The Bacchae.”

“What is the difference between the artificial and the organic in both theater training and performance? I thought it might be interesting for the students to explore,” Slowiak explained.

There is a strong presence of Noh theatre in the UA production through the set, costumes, music, masks, puppets and physical acting. Noh theatre is a traditional form of Japanese entertainment and one of the oldest dramatic performance types in existence that still continues to be performed in its original form.

As actress Kim Woodworth explained, Noh theater focuses on working “with a very low center position.” Traditional Japanese theater features musicians sitting on their knees as a backdrop to the acting on stage. According to Woodworth, many of these musicians train from a young age and follow a family tradition.

Woodworth is a veteran to UA’s stage. A recent alumna, she has returned to work with Slowiak on his current 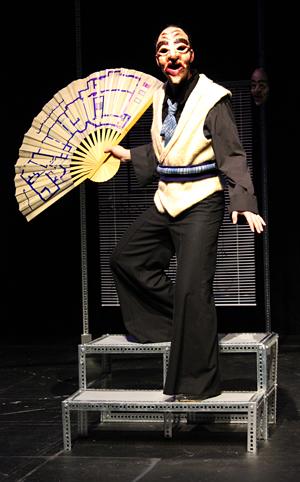 We experimented with masks and puppets and Noh theatre from Asian culture, mixed in with traditional American theatre. It was a really different experience in a very great way,” said actor Alex Funk.

Funk played a very physically demanding role but executed it with grace and precision. He is fascinating to watch as Billy. Funk gave a captivating performance through his strong vocal and physical acting abilities.

Funk noted, “Balance was a big challenge of my role. I discovered I do not have a lot of balance and working especially with a low-centered stance kept me closer to the ground and having to constantly fight gravity.”

It was very evident that he conquered this challenge. He gave an unforgettable performance.

Rosilyn Jentner was mesmerizing in the role of Margaret. In every show she appears, she owns the stage; it is difficult to direct your attention anywhere else when she is on the stage.  Her 1920s costumes were gorgeous and were, handmade by Adrian Jones.

Jentner played with a lot of the ideas of a 1920s housewife and a geisha for the role of Margaret. She used “slow flowing, graceful movements along with reserved, uptight, restricted movement” to bring Margaret to life on stage.  According to Jentner, these choices were made from using common sense about the character and her reality, with coaching from the director.

“We worked with the chakras and what each chakra represents. This was helpful finding where Margaret’s center resides,” Jentner said. According to the actress, the character’s center is based on how grounded she is. Although the character is complicated, Margaret is based in simplicity, Jentner explained.

Another scene-stealer was Jovana Bukvic. She gave a thrilling performance. Bukvic was meant to be in the spotlight. She was always in the moment throughout the show. A lot of her movements were also inspired by the Japanese culture, especially Noh theatre. Another inspiration was drawn form the 1920’s “Charleston craze.” Bukvic modified the steps and fit the movements into her score.

“My character, Cybel, is very much so in touch with nature, which makes her grounded, somehow in a way closer to earth,” Bukvic said. “She is very different from all the other characters in the play because she is idol-like and is seemingly calmer, wiser than the rest of the characters, just like Mother Earth.”

The masks were handmade and each actor had a mold taken of their actual face. They were used very clearly and were an essential element to the production.

According to Funk, the masks presented a challenge. Working with masks, Funk shared, causes one’s voice to become muffled.

“I had to learn to speak in different places (my chest, my stomach) so that more sound came through the mask,” Funk said. “It is also very important that the audience can see the masks at all times, except when it’s relevant for the masks to be hidden, which in some cases they are.”

“I have learned a lot about the social masks that we wear and how we use them when we are with different people and what it is like to drop that mask,” Woodworth said.