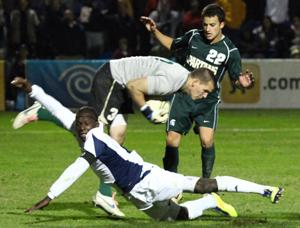 That was the last time The University of Akron men’s soccer team lost at First Energy Stadium-Cub Cadet Field. On Wednesday night, the No. 6 Zips lost to Michigan State 1-0 in the 87th minute.

The defeat is the first at home since their 1-0 loss to South Florida in the NCAA Tournament, snapping their NCAA home-unbeaten streak to 48 games, which was fourth all-time.

In the 87th minute of the game, Michigan State senior forward Rubin Bega put the game away with his fourth goal of the season off a long run where he shot the ball over the head of UA junior goalkeeper David Meves, netting the ball for a 1-0 score.

“You get out of this game what you put in, and we didn’t put in what we needed to win a game like this,” Akron Head Coach Caleb Porter said. “Very similar to Michigan and I’m at a loss for words, I’m shocked that it could happen again. It’s like déjà vu all over again.”

The last game the Zips lost came against Michigan on Oct. 18. when they lost at Ann Arbor, Mich. 1-0.

“We spent the entire two days talking about how we need to be driven and how we need to do things right,” Porter said. “It’s embarrassing that some of the guys just didn’t show and didn’t put it in like I said to win this game.”

The first half of the game was quiet for both teams. The Zips out-shot MSU 3-1, while both teams were tied for one shot on goal apiece.

The Zips did have a chance to score in the first half when freshman midfielder Wil Trapp shot the ball dead onto the goal, but the ball bounced right off the middle of the cross bar, where Michigan State defenders kept the ball from UA’s reach.

“Individually, guys need to find what pushes their buttons and find what they need to do to get ready for a game,” junior captain defender Chad Barson said. “It’s that time of the year where if you slip up, you have to turn your gear in and the season’s over. We’re just not as a team getting results. We think everything is going to come easy to us and always going to be perfect.”

In the 80th minute, the Spartans threatened to score when senior midfielder Joe Paljaj shot the ball straight toward the goal, but junior goalkeeper David Meves was able to come up with the stop for the Zips.

“Guys don’t want to go make a play and make things happen, and it’s just disappointing because it’s that time of the year when you need people to step up and make plays,” Barson said. “If you don’t, then you’re watching the national championship; you’re watching things on TV and you’re not a part of it and your season is gone.”

Overall, Akron is 16-6-5 all-time versus teams from the Big Ten under Porter

The Zips are 2-0 against Michigan State under Porter and are 24-11-1 all-time against the Spartans.

Akron will return to action this Sunday when they travel to Boca Raton, Fla. to take on fellow MAC opponent Florida Atlantic. Kickoff for the game is set for 2 p.m.