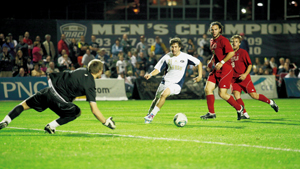 The Zips (13-3-3, 6-0 Mid-American Conference) were led by senior Luke Holmes and sophomore Darren Mattocks, who each contributed goals in the game.

Holmes scored his fourth goal of the season and the game winner of the match in the 39th minute of play. Holmes received a crossing pass from freshman DeAndre Yedlin, and his shot sailed past FAU goalkeeper Jeremy Crumpton.

“It was great to end the regular season with a win and complete the conference portion with a perfect 6-0 record,” UA Head Coach Caleb Porter said. “In all the years I’ve been coaching in the MAC, this year’s team has probably won by a wider margin, in terms of results, than any other team I’ve had. Obviously, we will have to continue that next weekend for two more games starting with the semifinal Friday at home.”

Mattocks netted his 18th goal of the season in the 62nd minute of play, after he was able to dribble the ball down the left side of the field and fire a shot into the lower right corner of the net.

“We have certainly had some ups and downs throughout the season, but we have played a very challenging schedule with a new group,” Porter said. “To sit at 13-3-3 heading into the postseason shows our resiliency to grind out results while facing some of the best teams in the country, home and away.”

Akron’s defense was back to form against the Owls, as they Zips allowed just three shots (none on goal) after halftime. For the game, the Zips doubled FAU on shots, 14-7.

With the win, Akron has now recorded a perfect record in the MAC (6-0) for the fourth consecutive season, while also winning 27 straight conference games.

The Zips also extended their conference unbeaten streak to 37 games (35-0-2), which is the fourth-longest in NCAA history.

“From here on out, it will continue to be about results,” Porter added. “This team has been eager to start the postseason and it is finally upon us. All our goals are still in our grasp and if we play the way we are capable, there is no reason why we shouldn’t succeed.”

With Akron’s defeat of Bowling Green last week, the Zips claimed the seventh-consecutive Mid-American Conference regular-season championship and the right to host the league tournament next weekend.

The Zips will return to action this Friday when they take on No. 4 Western Michigan at 5 p.m. in the semifinal match at First Energy Stadium-Cub Cadet Field. The No. 2 seeded Northern Illinois Huskies with face the No. 3 Buffalo at 8 p.m. The winner of those two games will meet in the championship round Sunday at 4 p.m.