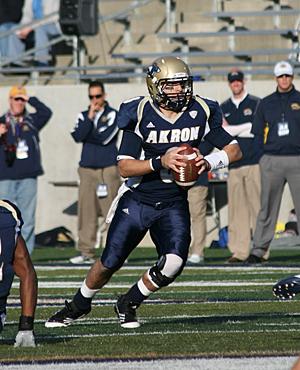 For Head Coach Darrell Hazell and the Kent State football program, Saturday ended in a similar fashion to its start, with possession of the Wagon Wheel.

The Golden Flashes dominated a demoralized Akron team en route to 35-3 win, earning their second straight victory over the Zips and first win in Akron since 2003.

“Today we had a tremendous performance in all three phases,” Hazell said. “We just keep scraping.”

The Flashes came out of the gates with a five-play 70-yard drive that ended with a 30-yard touchdown pass from quarterback Spencer Keith to wideout Chris Gilbert. The ensuing extra point was missed, and Kent took a 6-0 lead with 12:55 left in the opening quarter.

The Zips responded with a 43-yard field goal off the leg of kicker A.J. Fox with 5:08 left in the quarter. Kent would tack on a 46-yard kick to push the lead back out to six, taking the 9-3 into the half.

After intermission, the tight game would soon turn on its head as the Kent offense found the end zone on three of four third-quarter drives.

Running back Traylon Durham scored the first of the trio, completing a seven-play 44-yard drive with a one-yard touchdown run.

The Flashes then went to the passing game, as wideout Tim Erjavec caught a six-yard pass from Keith with 3:35 left in the quarter.

Durham found the end zone once again with 15 seconds left in the third, blowing the game wide open with a 29-3 lead.

Kent’s Jacquise Terry added a touchdown midway through the fourth to settle the game at the 35-3 final.

“The momentum swings in the second half we clearly didn’t handle,” said Akron Head Coach Rob Ianello. “Once they grabbed momentum, we could not get it back.”

Kent’s ability to run and stop the run proved to be the difference in the game, as they compiled 265 yards on the ground while holding the Zips to just 58 rushing yards.

“If you can’t run it and you can’t stop the run, you are going to have a hard time winning,” Ianello said.

The loss marks the sixth consecutive defeat for the Zips, while the Flashes earned their third straight victory.

Akron will wrap up their season with back-to-back road games as they head to Buffalo and Western Michigan in the next two weeks.