Zips set to take on Buffalo 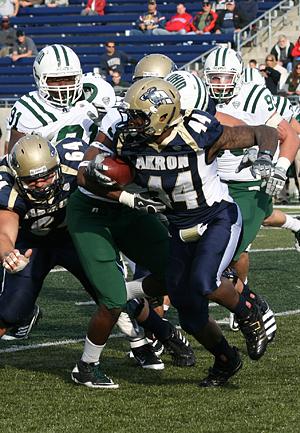 Both the Akron and Buffalo football programs have not won a game in over a month.

That will change Saturday afternoon when the two teams meet at University of Buffalo Stadium looking for a much needed win.

“We have a two-game season,” said Akron Head Coach Rob Ianello. “We have seniors we want to send out in the right way.”

“We are just going to continue to build,” Ianello said. “There’s no magic wand to fixing it.”

Buffalo’s season has looked similar to the Zips’, as they have lost their last four games. Eastern Michigan defeated the Bulls last week 30-17. Their last win came against Ohio on Oct. 8 in a 38-37 shootout.

Despite the losses, the Bulls have found a bright spot in running back Branden Oliver. The sophomore is second in the conference with 1,033 yards (103.3 yards per game) while adding 10 touchdowns on the year.

On the opposite side of the ball, the conference’s leading tackler, Akron’s Brian Wagner, will look to stop Oliver and the rest of the Buffalo offense. The junior linebacker has 138 stops on the year (13.8 per game).

For the Zips, running back Jawon Chisholm is 155 yards shy of the 1,000-yard mark for the season.

Chisholm’s 26 yards last week tied a season low, as Akron racked up only 58 yards rushing while giving up 265. It was a different story for Buffalo, as they were outgained 234-137 through the air.

Overall, both offenses have struggled throughout the season, as the two teams sit above only Kent State in total offense in the MAC.

The 12 p.m. matchup will provide a chance for both offenses to bounce back from last week’s performances.

“It’s important to me that our team finishes the season playing much better than we’re playing right now,” Ianello said. “It’s important for the players to go into the offseason with that.”

With only a pair games left in 2011 season, Ianello’s two-year run with the Zips has seen a total of two wins

“There’s plenty of examples throughout history of tenures that maybe have not started, but finished, greatly,” Ianello said. “I believe in this program.”

A year ago, the Zips received their only win of the season against the Bulls, a 22-14 victory in their final game of 2010.