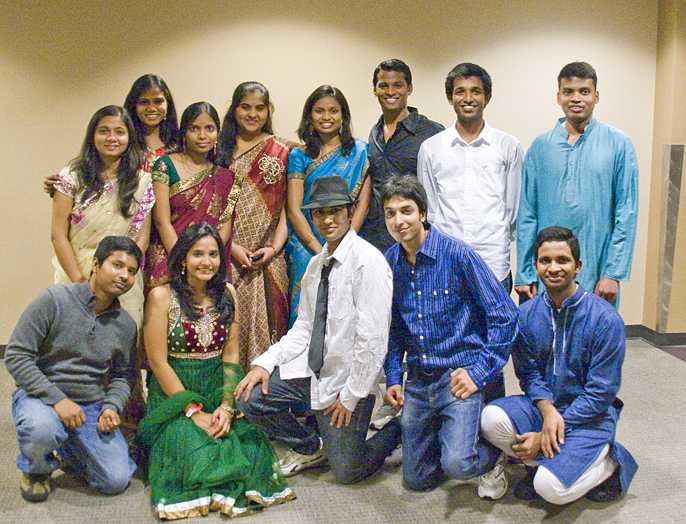 The occasion was the annual Diwali Night celebration, and for local Indian students who attended, dressing well was essential. It was an evening filled with singing, dancing and Indian cuisine.

“Everyone is supposed [to] come in the best attire of all year,” Indian Student Association President Srikanth Bajaj said.

UA’s Ballroom was filled with women dressed in saris with rich, vibrant colors of maroon, rust, aquamarine, scarlet, gold, orchid and fuchsia. The women traditionally wear the sari with a stitched blouse. The sari is a strip of unstitched cloth worn by females that is draped over the body in various styles.

Some Indian women also wear a “third eye” symbol on their forehead. 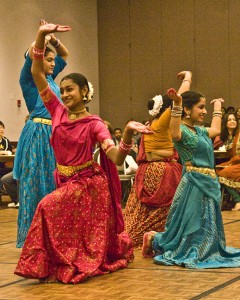 “The third eye is a concept, basically tapping into your subconscious mind or your consciousness,” Tallmadge High School sophomore and cultural performer Roshini Srinivasan said. “In wearing this, you are basically saying, ‘I respect my consciousness and yours as well.’”

Each year in the celebration of Indian culture, participants of this festival give expression to their happiness by lighting lamps, or ‘diyas.’ The lighting of the lamps represents giving thanks to God for all the blessings in their life.

“The festival is about the triumph over good over evil. It is the coming home of something great, something good,” Srinivasan said.

Srinivansan explained that the lighting of the lamp symbolizes the destruction, “through knowledge, of all negative forces.” Darkness represents ignorance and light is a metaphor for knowledge.

Srinivansan sang the Carnatic Song at the cultural festival, which is the classical music of Southern India. This is one of the world’s oldest and richest musical traditions.

“All the music is very devotional. The first song I sang, a more traditional piece, praised the Lord Ganesha, the mover of obstacles. The second praised the goddess,” Srinivansan said.

Another memorable performance was the Pushpanjali dance performed by Arushi Badola. The Pushpanjali stands for saluting and offering flowers to God. Badola gave a beautiful performance full of rich Indian culture.

Badola had a clear respect and understanding of the dance. Each step was so precise and graceful. For being so young, she is a very powerful dancer. Badola had mehndi, a form of temporary skin decoration in India, on her feet and hands. Henna is typically applied during special occasions like weddings and festivals.

The dancing at the festival was unbelieveable. The talent and skill of the dancers made a lasting impression. Among the memorable performances were the Bollywood Dance and the Bollywood Medley dance. The rhymic skill and grace of the dancers was energetic, the dancers’energy infectious and filling the room. The audience watched the dancers in amazement and gave them a roaring applause.

“You have never experienced dance until you have seen an Indian one,” Tallmadge Middle School student and cultural [erformer Sneha Srinivasan said.

There was also a large array of Indian cuisine including paneer tikka masala, vegi korma, malai kofta and ralta. The Indian cuisine offers a wide assortment of diverse vegetables and spices. Cooking is considered an art in India.

“The poor and rich come together to share food, so that everyone can enjoy it,” Bajaj said.

Like an artfully prepared Indian meal, Diwali Night provided a rich cultural feast that everyone came together and enjoyed. The line for the food seemed like a mile long, yet everyone was so kind and courteous to one other.

“I like the food and everyone is really nice,” Nguyen said. “This is a chance that I learn something new and I really appreciate it. I want to come back again next year.”

Nguyen was able to borrow a sari to wear for the evening. She looked stunning in the rich teal colored garment.

“If I were in my country, I wouldn’t have been able to know about this. It is because I came to Akron. Akron provided the conditions to do everything. I am able to learn about their culture,” Nguyen said.

Srinivas Bandaru, general secretary of UA’s Indian Student Organization was “very happy with the turnout. The event was awesome; there was a huge crowd. Everyone liked the food and the activities,” Bandaru said.

“It is a great, intriguing culture; you will always learn something new,” Roshni Srinivasan said. 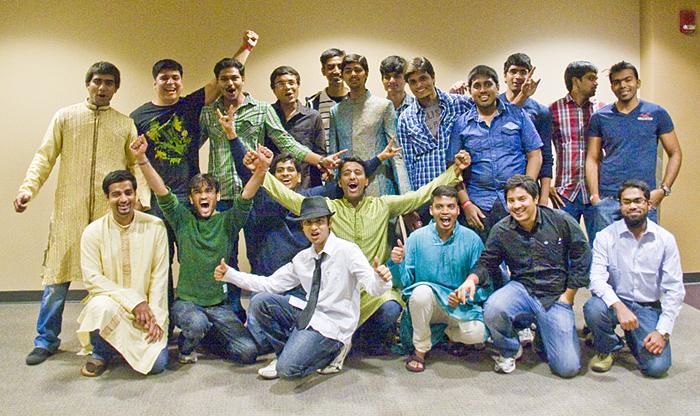