A lot to bear: Zips travel to Cincinnati Saturday 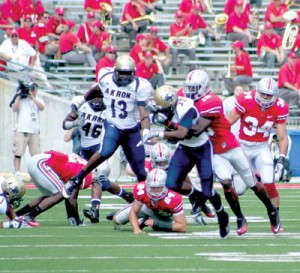 Cincinnati, coming out of the Big East Conference, will look to keep cross-state foe Akron winless on the season.

The matchup of the two Ohio schools will mark the sixth meeting between the two teams. UC leads the all-time series 3-2, including a 17-15 last-second win the last time the two teams met in 2008.

The Bearcats split their first two games of the season, defeating Austin Peay in their opener, 72-10, then lost to Tennessee on the road, 23-45.

The 72 points UC posted against Austin Peay was an NCAA FBS best for week one of the season.

The Bearcats are coming off a 4-8 season, but second-year Head Coach Butch Jones brings back 16 starters for 2011 season.

“The biggest thing in our football program right now is this week is critical,” Jones said. “There’s always a sense of urgency beginning game week, but this week, the sense of urgency has picked up that much more from our coaching staff to our players to everyone.”

Jones returns a few of the Big East’s best in the conference’s top passer from a year ago (Zach Callaros), rusher (Isaiah Pead), tackler (JK Schaffer) and leader in receptions (DJ Woods).

Akron continues to look for its identity and first touchdown of the year after a 41-0 loss at Ohio State and 42-3 loss at home verses Temple last week.

“We have an Akron football team coming in here that’s very hungry. I played against them for a couple of years. I know what they’re all about,” Jones said.

Despite the tough start to the season for Zips, linebacker Brian Wagner, who has lead UA in tackles the past two seasons, continues to be a force on the defensive side of the ball.

“I think Wagner, their linebacker, is as good of a linebacker as there is,” Jones said. “He’s very reminiscent of [senior linebacker] JK Schaffer.”

Wagner and company will look to improve a defense that has given up 11 touchdowns through the first two weeks.

Starting quarterback Clayton Moore will also need to dramatically improve an offense that has yet to put the ball in the end zone. Moore has completed 18 of 42 passes on the season for 246 yards and two interceptions.

Moore will lead the Zips into Cincinnati Saturday, as kickoff is set for 3:30 p.m.

Head Coach Rob Ianello could potentially grab his first road win as a head coach and second win ever at UA.

The Zips have yet to play outside the state this season, and will not do so until they travel to Eastern Michigan on Oct. 1.