People filled the atrium at the Myers School of Art on Thursday evening to have their senses stimulated by the spectacular idiosyncrasy show developed by Advanced Graphic Design students and their instructor, Markus Vogl.

The show, which focused conceptually on eccentricity and obsession, overflowed with character and intrigue. The pieces compelled viewers with sound, light, video, interactive elements and more.

Many of the works carried deep personal meaning to the participating design students, but also were a testament to the mentality of society and this generation of young adults. 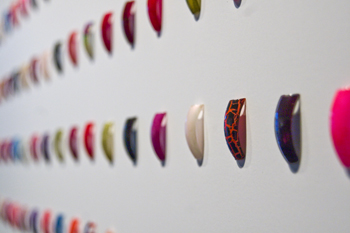 “The theme for the show is obsession. My piece is about my obsession with myself,” said Bradley Lutz, whose installment, Selfdom, was comprised of a compilation of videos of himself projected onto a mirror.

“I guess I think a lot about what other people are thinking about me . . . Sometimes I feel like it could be a little embarrassing . . . It’s showing you me, directly,” Lutz said. 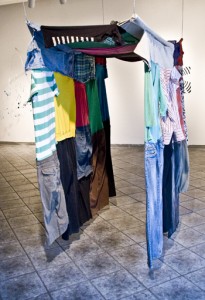 While some pieces were unarguably pleasing to the senses, such as Tempo, a piece by Alexander Zvada which featured LED lights that danced to sounds and music, other pieces sucked in viewers with startling imagery that meshed beauty with the grotesque. Michael Evans’ piece, Mirror on the Wall, was a prime example.

Mirror on the Wall consisted of a mannequin head with lovely eyes that gazed out at passersby from behind a hideous latex mask. Stoically, the head rested in front of a shattered mirror, which seemed to create the illusion of one’s own face taking on the features of the mask itself, generating a moment of personal discomfort for anyone peering into it.

“My piece has to do with dismorphophobia disorder, which is a disease that contributes to flaws in one’s character that they themselves can only see,” Evans said.

For many of the designers, this was not only their first show, but also their first time working in-depth with their selected mediums. With the success of the show, however, one could hardly tell that these students were anything less than well experienced in the mediums of choice, executing all of the pieces with great care to create visual intrigue.

In addition to the rigors of creating the pieces for Idiosyncrasy, graphic design students also were expected to come up with a marketing campaign to raise awareness of and draw people to the show — perhaps one of the most challenging, yet important, aspects.

Several of the participants testified to the difficulty of choosing the name for the show, which was an essential element in creating the final mood and establishing the underlying meaning of all of the projects included.

“I think it turned out amazing. . . I’m really happy to be a part of it,” said Rachel Tortelli, whose piece Switched addressed the obsession of completing unfinished tasks and fear of the unknown via interactive switches and lights.

“It is a slightly chaotic process, because there is so much to be done within 15 weeks,” said assistant professor Markus Vogl. “I don’t give them a theme, I don’t give them a name; they have to come up with all of that themselves . . . Everybody has to contribute . . . it’s very fast-paced.”

The show, the principal component of the Advanced Graphic Design class, is in its second year. According to Vogl, there are more to come in the future. 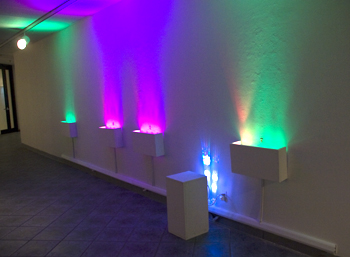