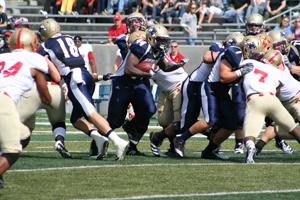 After a 49-point loss to Western Michigan Friday, the Akron football program finds themselves in a similar spot to last year.

On Friday, loss number 22 came by way of a potent Western Michigan offense.

The Broncos (7-5, 5-3 MAC) got six touchdown passes from quarterback Tyler Van Tubbergen, who threw only two incompletes on the day (19-of-21).

While Van Tubbergen rarely saw a pass hit the turf, the Zips had a hard time keeping the ball off it, as four fumbles would go as part of five turnovers on the day.

UA quarterback Clayton Moore coughed up the first fumble on the fourth play from scrimmage, as Western took control on their own 45-yard line.

Five plays later, Van Tubbergen hit wideout Jordan White on a 22-yard pass for a touchdown. WMU took the 7-0 lead with 11:41 remaining in the opening quarter.

After a field goal by the Broncos, the Zips forced a safety in the late first and kicked a field goal of their own in the early second quarter to pull the game to a 10-5 margin.

The five-point deficit was the closest the Zips would get, as the rest of the quarter belonged to Van Tubbergen.

Western wideout Robert Arnheim also got into the mix, tossing a second-quarter touchdown pass of his own.

The five touchdowns made the halftime score 45-5, as the Broncos put together 407 yards of total offense in the opening half.

Western kept the momentum going in the second half, at one point leading 66-5, but Akron running back Jawon Chisholm found the end zone late in the third to give the Zips their first touchdown of the day.

Linebacker Troy Gilmer would make it 66-19 with 21 seconds left in the third after a 72-yard fumble return for a touchdown.

Western added a fourth-quarter safety to settle the final score at 68-19.

The Zips compiled 208 yards of total offense to Western’s 577 on the afternoon.

Chisholm finished the day with 76 yards on the ground, bringing his season total to 961 yards. The redshirt freshman found the end zone five times on the year while averaging 4.4 yards per carry.

Moore completed five of 18 passes on the day for 35 yards. The sophomore finishes the year with nine touchdowns and nine interceptions while completing 47.6 percent of his passes.

Linebacker Brian Wagner did not play due to a knee injury. The junior entered the game ranked second nationally in tackles.