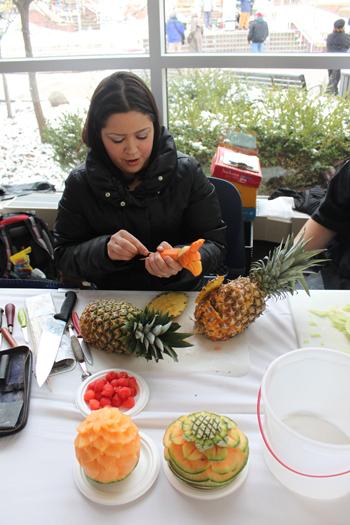 The University of Akron’s ice carving team showcased their talents outside the Student Union yesterday, using chainsaws and other tools to carve into blocks of ice ranging from 300 to 1,200 lbs.

Carvings included a hornet, a dragon, a giant throne for students to sit on and Zippy wearing a chef hat.

“Designs are selected by me to teach certain skill sets, and then by the carver as they get more advanced,” said Chef Richard Alford, who has been the coach and adviser of the ice carving team about 20 years. “Most of my carvers are Hospitality majors and anyone else who is interested.”

Students were given the opportunity to see some of the carvings emerge in real time during a speed carving competition that was integrated into the event. One of the competitors included UA alumnus Aaron Costic, who won a gold medal for ice carving at the 2006 Winter Olympics. The final round of the speed carving competition resulted in a tie between ice carvers Costic and Alford. 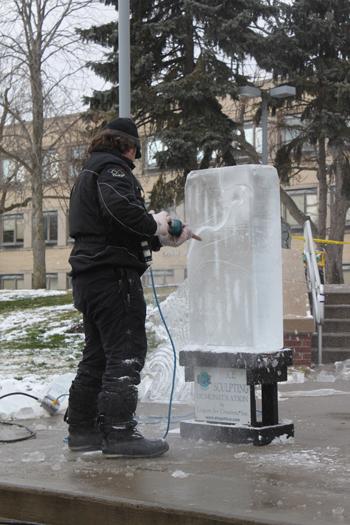 “The carving starts with a concept, then a drawing, then a template,” Alford said. “We draw from nature and what is around us, and what we can perceive in our minds.”

The blocks of ice used for the event come from Ser-ice in Akron and Elegant Ice in Broadview Heights, Alford said.

Fruit and vegetable carvers also displayed their work inside the Student Union near Starbucks.

The University’s ice carving team has won four national competitions since it was formed was formed in 1994.

The UA ice carving team will be performing next at Falls River Square for the Frozen River Festival Jan. 21 at noon.

Those interested in learning more about The University of Akron’s ice carving team can visit uagardemanger.com.