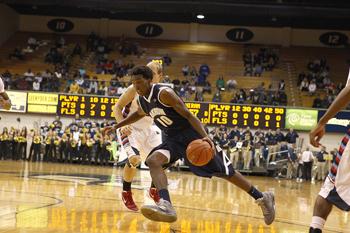 In a 57-56 game with only 3:58 remaining, Zips’ starting point guard Alex Abreu was scoreless.

That would all change after a kick-out from center Zeke Marshall landed in the hands of the sophomore guard, who proceeded to knock down the biggest three-point bucket of the night, giving the Zips a 59-57 lead over the Ohio Bobcats.

Abreu’s clutch three-ball sparked a 7-0 run, as the Zips would complete the comeback and finish the night with 68-63 victory.

“We are very erratic, but we have enough guts to hang in there and play through mistakes and enough toughness and discipline to win,” Akron Head Coach Keith Dambrot said.

After the Bobcats took a 30-29 halftime lead on a buzzer-beating three, they never trailed until Abreu’s first points of the game. The Zips never let the lead get higher than five though, and capitalized on Ohio’s late-game foul trouble.

OU ended the night with three key members of their frontcourt fouling out, while racking up 30 personal fouls on the night.

Akron’s 29-of-44 performance from the foul line proved to be the difference in the game.

“It was a very tough, physical game,” Dambrot said. “We just threw the ball inside. We thought that was our best chance.”

Marshall led all scorers with 17 points on 5-7 shooting while pulling down six rebounds and blocking three shots.

Brett McClanahan and Nick Harney of the Zips joined Marshall in double figures with 10 points each.

“Today was kind of poetic justice that we finally guarded him a little bit because he has just destroyed us,” Dambrot said.