Cabaret Company: Rise of the Plot 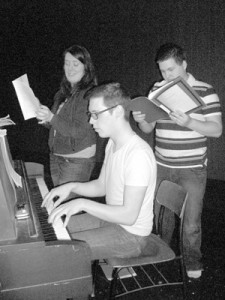 The Third Annual Cabaret Company: Rise of the Plot brings a night full of acting, dancing and singing Feb. 16-18 at 8 p.m. and Feb. 19 at 2 p.m. at Daum Theatre in Kolbe Hall.

Cabaret Company was created by University of Akron theater arts major Alex Funk. Funk was the first student to ever unite the theater and dance departments together to create a staged production.

This year, Funk will give his baby, so to speak, to a new director, Chris Simmons. Simmons, a graduate student at UA, also completed his undergraduate in theater at Akron.

Although Funk may not be directing the show, he will be the producer who makes sure things get done.

“Cabaret Company is my baby, but it is a baby that grows and transforms every year,” Funk said. “Right now, I would say it is a toddler, and I wanted to see what he would do with a different caretaker.”

So far, Funk is feeling confident about the change of hands.

“Chris Simmons, I have no doubt, will be able to bring what Cabaret Company needs to the table and then carry through with it,” Funk said. “I am very excited for this year’s installment.”

Simmons was present when Cabaret Company was created. He is very familiar with the process and has directing experience.

Simmons directed his senior honors project “Little Shop of Horrors,” a musical about a human-eating plant. He has also acted in numerous main stage productions at the University. His most recent production was “The Gospel According to Tammy Faye.”

According to Simmions, directing Cabaret Company is an “interesting experience” for him because he is used to being in the role of the actor, and directing is a nice change of pace for him.

For the third annual Cabaret Company, Simmons decided to go with a spinoff of “The Little Mermaid” tale.

In this spinoff, a theater student wants to be a triple threat — an actor, dancer and singer. In order to accomplish this, the student sells her voice.

The audience can also expect to see songs from “Wicked,” “Spamalot,” “Legally Blonde,” “The Lion King,” “The Wedding Singer” and much more.

To bring this show alive, the cast of “Rise of the Plot” is working hard to make this the best show to date. Each rehearsal consists of intense music and choreography work. The dance numbers were choreographed by Catie Huff, along with assistant choreographer Kelsey Schlabaugh.

The time that is put into making a great show is quite significant. Simmons had to work around the cast and production teams’ schedules, as well as the theater department, to determine when they could rehearse. They have only been able to rehearse a few times over winter break and have been in weekly rehearsals since the beginning of the semester.

“In theatre you can always use more time,” Simmons said.

Observing the rehearsal, the cast members seemed to be comfortable working with Simmons as a director. The environment felt educational and welcoming. According to Simmons, what he learned from his directing experience is that “you have to have patience and learn to adapt.”

“You never know what’s going to happen,” Simmons said. “You have to be willing to adapt. Nothing goes perfectly as planned.”

Simmons has a talented cast this year. Audience members can see some new faces and some familiar ones as well.

“People should come support their classmates and support the theater and dance departments,” Simmons said.

The event is free, but donations are accepted.