The Akron Art Museum and The University of Akron have formed a partnership which now provides membership benefits to all students, faculty and staff of the university with a valid Zip Card. 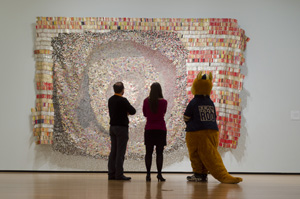 As members, the UA community will now receive all of the same benefits as other members do, including free admission into the gallery as well as free or discounted admission to special exhibits and events such as exhibition opening parties, concerts, classes, workshops, lectures and programs.

Free parking in the members only parking lot is another benefit. Also, all members receive a 10 percent discount in the museum store.

“The museum offers students the chance to explore art and their own attitudes as well as particular styles and artists,” Director of Marketing Communication Elizabeth Wilson said.

The Akron Art Museum showcases a variety of celebrated artists and collections. The museum also offers films and videos, concerts and workshops to help its members discover new perspectives on different works of art. 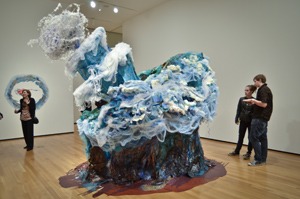 The museum recently celebrated its 90th anniversary, celebrating its evolution from its grand opening in 1922. The museum now contains many modern works of art by contemporary and regional artists.

The Akron Art Museum is located in downtown Akron two blocks away from Quaker Square. The surrounding area offers eateries and clubs such as Crave, 3point, Urban Eats and Musica. The Akron Art Museum even offers extended hours on Thursday nights until 9 p.m.

Galleries are open until 11. The night will feature live entertainment, free snacks, cash bar and a hands-on art making activity in the lobby.

“Stranger in Paradise: The Works of Reverend Howard Finster” and “Ray Turner: Population”

Matthew Sutton traces how Howard Finster’s career benefited from rock band R.E.M. in the 1980s. Sutton holds a PhD in American Studies from the College of William and Mary in Williamsburg, Va.

Dan Graham’s video art piece Rock My Religion shows the connectedness of rock and roll and religion. Graham creates a collage of preachers and dancers with early rock fans, featuring original music by Glenn Branca and Sonic Youth. This event is free on a first-come, first-seated basis in the Lehner Auditorium.