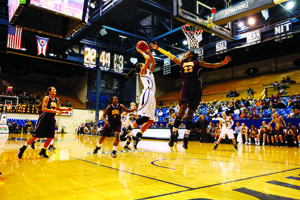 The University of Akron women’s basketball team (10-14, 4-6 MAC) moved up two positions in the Mid-American Conference standings over the weekend.

Akron started Saturday in eighth place, but was able to overtake Central Michigan (12-12, 4-6 MAC) after beating them 97-87 on Saturday afternoon.

Akron sophomore forward Sina King played in her first home game after being lost to injury late in January. King was leading scorer with 19.

She received support from fellow junior guard Taylor Ruper, who hit a couple important three pointers. Ruper finished with 16 points of her own.

The Zips entered the game on a three-game losing streak, and early in the contest did not appear to be playing any better than they had been before. CMU was able to jump off to a 16-4 lead after Central’s Taylor Johnson knocked down two free throw attempts with just under 16 minuets to play in the first.

The lead hung around 11 points before the Zips were able to drastically cut into it.  Starting with five consecutive points, scored by sophomore Carly Young, Akron rallied to slim the deficit to four points, 23-19. Eventually, Akron was able to even the game at 20.

Akron head coach Jodie Kest was proud of her team, as they did not let the early deficit get in the way of their confidence.

“I thought our kids hung in there real well,” Kest said.

However, with just seconds remaining, Central Michigan’s Jessica Green launched a half-court buzzer beater that found nothing but net. Central went into halftime with a three-point lead.

At the start of the second half, UA and CMU traded leads. Exchanging blows, the Zips eventually were able to pull ahead. Behind Ruper’s 11 second-half points, Akron extended their lead to seven points with just under 13 minutes to play. What ensued afterward was a cat-and-mouse game.

Central was able to fight within three points several times in the last 10 minutes. Akron finally jumped out to a comfortable lead and, with about three minutes left, was able to coast to a victory.

Kest was satisfied with how well her team played together.

“I thought we were very unselfish,” Kest said. I” thought that may have been…as good as we have played for a long time as a team.”

Akron will next play Western Michigan (6-17, 3-7 MAC) as they continue a four-game homestand. The remaining games will be important as the Zips are jockeying for position in the Mid-American Conference. If Akron can stay within the top eight seeds, they will earn themselves a home game in the first round of the tournament.