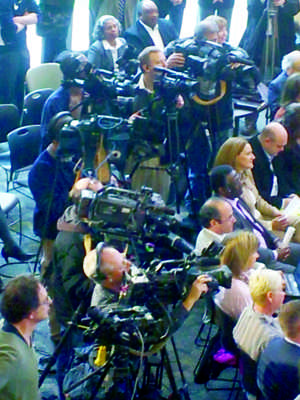 His role in the administration will focus on student success. Though rumors circled during  semester that Tressel was being considered for head football coach prior to the hiring of Terry Bowden, Tressel will in no way will he be affiliated with Akron football.

However, during Akron’s recruiting for a head football coach, Proenza said he “began an exciting conversation” with Tressel and learned their vision for student success was extremely alike.

“It’s always important where you are…if you can come back to the place that gave you your first chance…and they could have given it to many other people…I’m excited about being a Zip,” Tressel said after being introduced by President Proenza. Tressel returns as an alumnus, having earned his master’s in education from UA.

Tressel is excited to translate his former legacy to Akron’s Vision 2020, a new standard of performance that links the University with the surrounding community.

“The legacy I would like to leave is that we truly cared about every student…that I cared about the young people,” he said.

Though his role at the university will be only academic, “I’ll be coaching every day…that’s not out of my blood,” Tressel said. “The part I missed the most wasn’t game day, but the day-to-day working with the staff and the players. 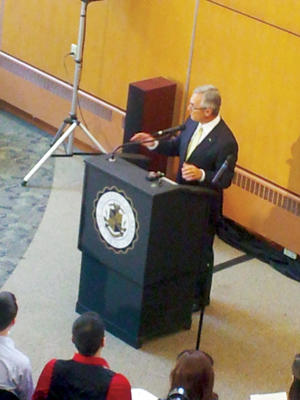 “You have to get over things and you have to get excited for other things. I’ll always be grateful for the opportunity I had to be around the game of football. I’m also excited to grow in a different way,” Tressel said.

The position has a “concentrated focus on success of each and every student,” according to the Vice Chairman of the Board of Trustees Ralph J. Palmisano. “That focus defines Jim Tressel.” Palmisano is confident that Tressel will attract other supporters of Akron through his vast network, notably apparent from the vast array of press present in the Honors Common Room, most being addressed by Tressel on a first-name basis.

The new administrative position is geared toward the Akron Experience.

“The Akron Experience really resonates with me,” Tressel said. “Our greatest victories were not in bowl games…they were in the lives of our students.”

This sentiment was reiterated by Mary Beth Clemmons, president of Associated Student Government at UA. Clemmons said are 29,000 students on Akron’s campus, all with a “common goal…we aim to pursue excellence.”

The former coach said that the commitment he has made to Akron will be as strong as any.

“The commitment I’ve made to any place I’ve gone is to work every day like I’m going to be there forever, like it’s the last place I’ll work,” he said. Tressel’s passion, he said, is not in going to the NFL, but in academics.

“Four or five years ago I began thinking of the academic side of institutions,” he said. A transition to education was included in his contract with OSU.

Also present was Superintendent of Akron Public Schools David W. James, who shared his excitement in welcoming Tressel to Akron. 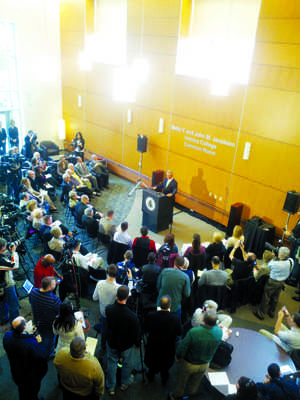 “Tressel’s addition means that more kids will have more opportunities and our entire community will benefit,” James said.

“The University of Akron cares about the world,” Tressel said. “The impact they’re making in laboratories and classrooms affects the world.”

Tressel said he has spent his time since the NCAA scandal reading and learning.  The scandal, involving players on the Ohio State football team selling items for personal gain, ended Tressel’s career at The Ohio State University in a very public way.

“The thing that shapes anyone the most is adversity, change…the chance no tot be distracted….sometimes when you get so involved in so much you get distracted and you don’t learn as much,” he said.

“God knows we’re not all perfect,” Tressel said. But, he said, his “intentions have always been to help young people, institutions.”