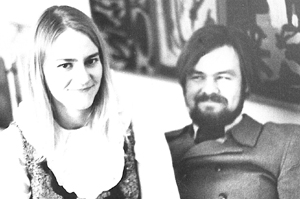 In light of Valentine’s day, The Univeristy of Akron recognizes one of it’s own couples who have stood the test of time.

Who they are: Randy Pope is professor of arts administration at the University of Akron Graduate School and Nancy Pope taught history and dramatic literature for the theater department.

How long they’ve been together: The couple will have been married for 42 years this coming September.

How they met: Randy met Nancy in 1959 when Randy was in a folk group with Nancy’s younger brother.

“Nancy and her family have a great sense of humor,” Randy said.

Randy was in junior high and Nancy was in high school. Randy came over to Nancy’s house and practiced with the band.

“I thought he was attractive,” Nancy said.

Since then, Nancy and Randy were friends, but didn’t start dating until college. The two went to graduate school together.

One day on a sailboat trip, Randy and Nancy decided to take a swim in the water. While in the water, the wind started to pick up and the sailboat started to drift away so that Randy had to chase after it. Once Randy made it into the boat, he helped Nancy in, but Nancy lost her swim suit top.

Randy looked at her and asked her, “Do you want to go out?”

Marriage: The couple lived in the house where Nancy grew up in, after Nancy’s parents died.

How they make it work: While being married, they evoke a no-blame zone.

“It avoids secrets,” Randy said. The openness helps to build trust between them.

“I think we both took our vows very seriously,” Randy said. “I think it’s a blessing. We don’t have many friends who have been married this long.”

Influences: Both Randy’s and Nancy’s parents met in school, were married soon after and enjoyed long marriages.

Valentine’s Day plans: They don’t make a big deal out of it, but will most likely go out to eat.