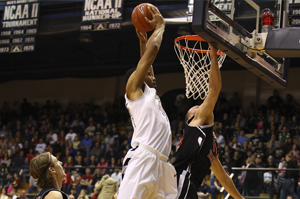 An often undervalued part of college basketball is the ability for a given team to go on a scoring run, or as Akron Head Coach Keith Dambrot calls it, a scoring spurt.

“We are really good at spurt-ability,” Dambrot said. “You can win a game in one good spurt.”

The 24-point win marks the seventh straight for Dambrot and company, as they end their regular season with an unblemished record of 6-0 against MAC West schools.

Three Zips finished in double figures, with Nik Cvetinovic leading the way with 14 points on the night. Off the bench, Demetrius Treadwell (11 points) and Nick Harney (12) joined Cvetinovic in double digits.

“I think that was a dagger in the game,” Harney said. “A lot has to do with getting a feel for the game.”

The Zips certainly had the feel for it defensively in the second half, limiting the Huskies to 8-of-26 shooting (30.8 percent) and 0-of-8 from three-point range. Akron was not overwhelmingly great offensively but finished the game 25-of-47 from the floor (53.2 percent).

“It was a good game because we had to work for it,” Dambrot said. “I thought they made some really hard shots in the first half.”

Abdel Nader and Keith Gray led Northern Illinois with 13 points each. No other NIU player eclipsed seven points for the game.

The sweep of the West division was the second under Dambrot and the first since the 2005-2006 season. The eight-year head coach also became the seventh coach to win 200 overall games at a MAC school and the eighth to win 100 league games.

The Zips will return to MAC East play on Wednesday when they host Miami of Ohio (8-15, 4-6 MAC). The Redhawks are coming off a 69-50 win Saturday over Central Michigan.

“I think Miami is a funny team,” Dambrot said. “I think they’re capable of beating anyone in the league and losing to anyone in league.”

Tipoff for the game is scheduled for 7 p.m.