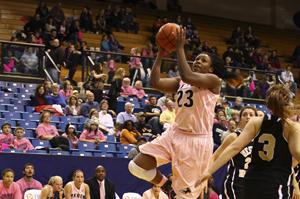 Akron opened up the game on an 8-0 run. Eventually, their lead improved to 14.

The early run was fueled by sophomore Hanna Luburgh, who scored all eight of the Zips’ first points, and produced 13 points in the first 13 minuets. However, she would not score again in the half and the Western Michigan Broncos would be able to fight their way back into relevancy.

With 1:30 to play in the half, WMU had come from behind to cut the deficit to three at 30-33. Akron extended the lead to four before the end of the half.

Just as in the first, Akron came out of the locker rooms and Luburgh lit up the score board, scoring the first five points in the half and finishing the game with a team-high 21 points.

The early run was enough for the Zips to jump out comfortably in front and tactically build their lead from there.

In the victory, Carly Young came away with a double-double, scoring 15 points and pulling down 11 boards. It was her third double-double in her career.

Even with the victory, Akron Head Coach Jodie Kest was not fully satisfied with the effort her squad gave. She cited turnovers and giving up open looks as the major problems that need to be cleaned up.

“I said the two things that concerned me — why it was such a close game – was, number one, their three point shooting…and they had a ton of open threes,” Kest said, “and number two was 18 turnovers in the first half is just unacceptable…Sina [King] had a team-high 11 turnovers.”

Despite King’s trouble, Kest made sure everyone knows that the team relies on her, and she is an essential for the team’s success.  History tells us that King will not be down for long.

With the victory, Akron kept the sixth place spot in the Mid-American Conference standings. They will play Ohio (11-14, 4-7 MAC) tonight at 7 p.m. at James A. Rhodes Arena.

In their last meeting, Ohio got the better of Akron, coming away with a close 72-71 victory.