Up ‘Til Dawn returns to UA, breaks team goal

Up ‘Til Dawn, a student-led philanthropy event which benefits St. Jude’s Research Hospital in Memphis, Tenn., was held on Friday in the Student Union. Students and faculty helped raise $34,014.50 to be given to the children at St. Jude’s.

Thad Doyle, associate director of Student Life and Up ‘Til Dawn adviser, started the program in the fall of 2006 because he “wanted something different” and wanted to “provide leadership opportunities” for all students. 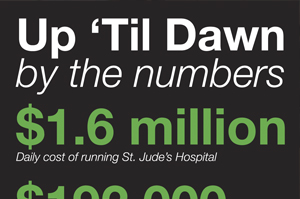 Up ‘Til Dawn is a unique philanthropy to start because it “attracts students to get involved no matter what demographic,” Doyle said. It also gives students the chance to engage in the community.

Students were prompted to sign up in teams to write letters in November. Each team was comprised of six people and encouraged to attend the “All-Teams Meeting” to start fundraising for St. Jude’s.

The teams wrote letters to family and friends asking to donate money to St. Jude’s. This year, the Up ‘Til Dawn executive team had a goal of recruiting 50 teams, but ended up recruiting between 56-58. Several thousands of dollars were raised through letter writing alone.

Before the final event of Up ‘Til Dawn, the executive board held a date auction which helped raise $115.00 for the children at St. Jude. This money was added into the total amount raised for the event.

As a thank you to the teams for helping raise money, Up ‘Til Dawn was created. The event started at 10 p.m. on Friday and ended at 6 a.m. in the Student Union Ballroom Saturday. Activities included craft-making for the children at St. Jude’s, where participants put together bags of art supplies.

Many Up ‘Til Dawners participants also played Rockband, ping pong, cornhole and basketball on an inflatable court. “Gilligan’s Island” also played on a television, while others had fun on the dance floor.

Students had the chance to bid on prizes which included Akron apparel, a Kalahari Resort package and a digital camera package. The executive board raffled off all sorts of prizes, including a Kindle Fire, around 5 a.m.

A local mother spoke at the event about the superb treatment her daughter received at the St. Jude’s. She emphasized how much her daughter loved being at the hospital and how much others cared for her there. She also talked about how raising money for St. Jude’s is important for daily hospital operations.

The daily cost of running the hospital is approximately $1.6 million. No child is turned away due to a family’s financial situation. Also, all of the research conducted at the hospital is shared freely throughout the world in hopes that no child has to die in the dawn of life.

According to Kayla Luttrell, senior event marketing representative for St. Jude’s, the hospital treats around 280 patients a day.

Maria Zimmerman, executive director for Up ‘Til Dawn and student at The University of Akron, was more than pleased with this year’s turnout at the event. Zimmerman said the sponsorship blitzes, vendors and advertising helped the program reach its fundraising goals. She said the teams for Up ‘Til Dawn “surpassed all our goals, which is rewarding.” The event made news on Fox 8 in Cleveland and aired at 7:20 p.m. on Friday.

Zimmerman said her favorite part of the event was “seeing everything go full circle.”

Zimmerman visited St. Jude’s hospital earlier in the year. She was able to “[see] the patients [she] was helping at St. Jude’s.”

Doyle was thrilled at the “dedication of the student executive board. The students go above and beyond. They are what keeps me excited.” He encouraged all students to “support something that is much greater than themselves.”

Luttrell came to the event Friday night. She said there are 30 offices around the country which all help to raise awareness and fundraise for St. Jude’s. She is one of four representatives who work out of the Columbus, Ohio, office. The representatives help universities plan their Up ‘Til Dawn event.

Luttrell said her favorite part of Up ‘Til Dawn is “the stories you hear from students, students changing their outlook with this one event.” She was happy to say The University of Akron beat last year’s total amount of money raised.

This is the 12th year of the Up ‘Til Dawn program nationwide. Up ‘Til Dawn is held at over 350 colleges. This year there were over 300 people who participated at UA. All of the money raised will go straight to St. Jude’s and will be used for research, patient costs, innovative cancer technology and more.

Within the past six years of holding the Up ‘til Dawn fundraiser, The University of Akron has raised over $192,000.

For those interested in participating in next year’s Up ‘Til Dawn event, executive board positions can be sought by going to the POD in the Center for Service and Leadership in the Union. Students can also find more information on OrgSync, Facebook and at RooFest.