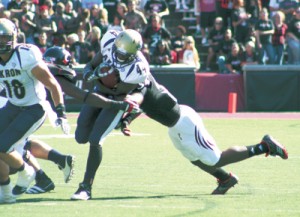 Seven different UC players found the end zone through two quarters, eight for the game, as it took Akron until there was 13:37 left in the fourth quarter to score their first touchdown of the season.

The Bearcats opened with an impressive nine-play 60-yard drive, as senior tailback Isaiah Pead ran it in from a yard out to give Cincinnati the early lead.

Three minutes later, a fumble from Clayton Moore was picked up by UC’s Maalik Bomar, who took it the rest of the way 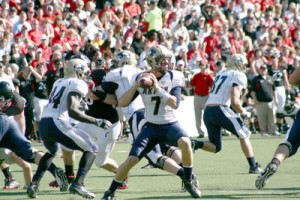 “We moved the ball on them a couple times early in the game…we just had too many breakdowns in the first half,” Ianello said.

The second quarter did not get any better for the Zips as Moore threw an interception on the first play. Dominique Battle of Cincinnati took it in for six from 36 yards out, making the score 21-0.

The nightmare continued for the Zips as quarterback Zach Collaros ran for a seven-yard touchdown and the clock hit 11:40 in the second quarter.

The rout continued as the Bearcats’ George Winn took a three-yard run into the end zone with 4:54 left in the quarter.

The seventh first-half touchdown for UC came via junior defensive back Camerron Cheatham, who took a Moore pass the other way for a 53-yard touchdown.

“We kept their offense off the field but for the wrong reasons,” Ianello said. “I don’t know if I can point to one single play because there were several that went in the wrong direction.”

The second half did give light to the Zips, as a Clayton Moore pass connected with sophomore wide out Keith Sconiers early in the fourth quarter for a 51-yard touchdown pass.

Moore found wide out A.J. Price with 50 seconds left in the game to give UA their second touchdown of the game and of the year.

“I’ve never been in a game like that before in my 25 years,” Ianello said. “We got to go back and have another good week of practice and transfer that to the game.”

The Zips did have a few bright spots amidst their performance. Redshirt freshman Jawon Chisolm churned out 133 yards on the ground on 25 carries. Sconiers pulled in seven balls for 137 yards receiving along with his touchdown.

UA will host Virginia Military Institute this Saturday at InfoCision Stadium. Kickoff is scheduled for 2 p.m.