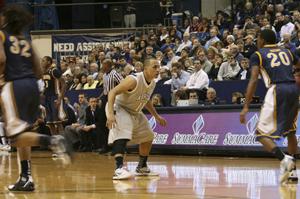 Keith Dambrot was hired as the head basketball coach of The University of Akron in 2004.

In his inaugural season leading the Zips, Dambrot finished with a 19-10 record, the most wins at UA since 1988-89.

What he and his program have done after those 19 wins is nothing short of remarkable.

Only 20 men’s basketball programs in the NCAA have won 20 or more games in each of the last six years. Dambrot leads one of them.

The eight-year head coach is now closing in on a seventh consecutive season of 20-plus wins, and he will once again lead the Zips into March with high hopes.

The success has not stopped in the 2011-2012 campaign as he most recently became the seventh coach in Mid-American Conference history with 200 wins. In his seven plus seasons at UA, he has tallied 180 wins to just 82 losses.

The numbers don’t lie and the achievements are abundant, but only a game night at James. A Rhodes Arena gives a true picture of the kind of coach Dambrot has become.

Passion, feistiness and determination all come to mind when the coach is pacing back and forth along the sideline. The Zips do not even have a seat on the bench for their head coach.

In post-game press conferences, Dambrot is as likely to critique his own performance as his players. A 20-point win sometimes feels like a five-point loss when he is done talking.

He will always take the win.

Losing became all too familiar for the Zips last season, falling to 12-10 and 3-5 in the conference. All the head coach did was rally his troops and reel off 11 wins in 13 games to advance to the big dance.

This year is far different. Atop the MAC East, Akron controls its own destiny to get an automatic bid into the semifinals of the conference tournament. Instead of taking four wins like it did in 2011, it will only take two.

Whatever the circumstance at the conclusion of the regular season, the Zips should feel confident that they have Dambrot at least near their bench.