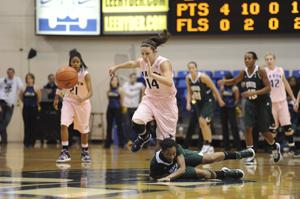 UA had several contributors who helped outscore the Bobcats 42-27 in the second half. Sophomores Carly Young, Hanna Luburgh and Sina King and seniors Natasha Williams and Jasmine Mushington each scored at least six points in the second half alone.

The Zips were led overall by King, who scored 16 points in the contest. Luburgh and Young checked in with 14 points each.

Akron collected one more rebound than Ohio (38-37) in the whole game, but the Zips won the second half 20-14. Ohio only collected three offensive rebounds the entire second half.

The leading rebounder for the Zips was King with seven. Three other players came down with at least five.

What may be the biggest reason the Zips were able to steal the six-point victory is that Ohio didn’t score a field goal in the last three minutes of the game. Editor’s note: this doesn’t make sense to me. The tough defense of the Zips was too much for the Bobcats to handle, causing them to commit 15 turnovers during the night. Akron was able to cut their turnovers down to 12.

With the victory over Ohio, Akron has won three games in a row. They will next take on division leaders Bowling Green at Rhodes Arena Saturday at 2 p.m.