Letter to the Editor: UAPD's seeming lack of care for a student's concern of safety 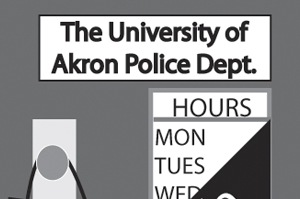 I am an international business major at The University of Akron. I also work in the Allied Health Department in the Polsky Building. I consider myself to be a very reserved, friendly student; in other words, I do not go looking for trouble by any means.

Last Thursday, I was going to deliver tests to the testing center for my department, going up the stairwell in the Polsky Building from the first floor. Between the second and third floor, a young African-American male threw a soda at the wall which sprayed all over the place.

I screamed, “What the hell!?” mostly because it startled me so badly. As I proceeded to continue up the stairs, the “gentleman” who threw the soda began screaming at the top of his lungs that he would “kick my ass,” “throw me down the stairs,” saying “I don’t give a shit!”

I thought it best to exit the stairwell. I exited onto the third floor and went to the University Police Office next to the Summit Bistro. Apparently, however, officers do not have established hours at the office and are rarely there.

Calling the campus police was my next step. I spoke on the phone with a woman who listened to my story, asked for a description and then said, “I will report it.”

I didn’t feel like hanging around, so I left to deliver the tests as planned. When I came back to Polsky, I noticed the same guy sitting at a table at the Summit Bistro. I called the campus police again. The same woman answered, I told her that the man I reported was still there.

Her response was, “Well, is he doing anything now?” I said, “No, but aren’t you interested in disciplining somebody who verbally assaults/threatens a student?”

Her response was, “Well, I’ll pass the info on to the next shift,” and the call ended. I could not believe it; she basically blew me off.

Any student who frequents the Polsky Building throughout the day is well aware of the presence of “less than desirable” members of the community who freely hang out outside, linger inside and roam the hallways and bathrooms.

I know that the hot topic tends to be student safety on the south side of campus, but Polsky tends to never be addressed as a problem area. Many students share an “uneasy” feeling when entering Polsky from the third floor and it should be addressed that the University should make an effort to restrict access for non-university persons, as well as provide on-site security. There’s no security for night classes in Polsky; anybody can walk in.