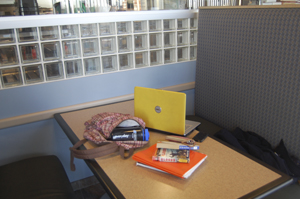 When leaving items unattended on campus, your smoke break can cost you your laptop.

“It has never been this bad,” Shelly Davis of University of Akron Libraries said, referring to theft on campus this year.  Davis is a library specialist at UA’s Bierce Library. Davis has been on staff at Bierce Library since 2002.  A lot of times when Davis sees laptops unattended, she says she will put them back, and that sometimes no one ever even asks about the misplaced laptop. The approximate cost of a lost laptop is $2,200.

In many cases, purses, wallets, iPads and even iPhones are left unattended.

“A student chased me to the bathroom and asked me what way the cameras were facing because he did not want anyone to touch his stuff,” Davis said.

“This is not just a problem in Bierce,” she said.  Students walking in the UA Student Union can witness the same casual leaving of unattended personal items.

The UA Police Department states on their webpage that theft on campus can be described through a triangle, where there are three parts to theft: desire, skill and opportunity.

It is explained that two sides, desire and skill, are difficult to change.  However, students can deprive thieves of opportunity and by doing so, protect themselves.  The website states, “We take the opportunity away by taking responsibility of our own valuables and our own personal safety.”

The UAPD gives several tips to avoid any valuables being taken.  Students are encouraged to not leave valuables unattended, be aware of their surroundings at all times and to take an inventory of all items of value.