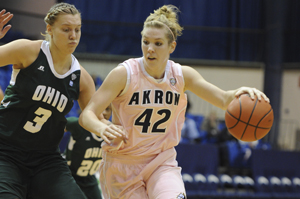 The University of Akron women’s basketball team fell to Miami University Wednesday afternoon with a score of 84-76 at Millett Hall in Oxford, Ohio.

Miami entered the contest in third place in the Mid-American Conference standings, while Akron started in sixth.

Miami’s five starters each scored more than 10 points. Forward Courtney Osborne led the way for the RedHawks with 21 points.

Akron started the game by falling into a nine-point deficit. The Zips trailed 14-5 after a little fewer than five minutes had been played. Akron, however, would recover.

Coming up with a 7-0 run over the span of four minutes, the Zips found themselves on the heels of the team that beat them earlier in the year in overtime.

Miami pushed their lead back to five before the end of the half, which saw the RedHawks leading 35-30.

UA stormed out in the second half to tie the game at 35 after sophomore Hanna Luburgh hit a three-pointer and junior Carly Young converted on a layup. Luburgh checked in with another three, extending the run to 8-0 and giving the Zips their first lead of the game.

What tuned out to be a heavyweight bout between two MAC contenders, Akron and Miami exchanged blows for most of the second half.

However, with eight minutes to play in the game, Miami found themselves on a large run that put them up by 10 points.

Akron’s loss has pushed their losing streak to two, but again did not affect them in the standings. UA remains in sixth place in the conference.

The conference still has two more games before the tournament begins, and Akron will likely have to win at least another game if they hope to lock in their spot.

Akron will next play at Kent State. Not only can Akron clinch the sixth place spot with a victory, but the game will count for one-half of a point in the PNC Wagon Wheel Challenge.

In the Wagon Wheel Challenge, Kent leads by a point, 3.5 to 2.5.  However, Akron can take the lead this weekend if the basketball team wins and the indoor track and field finishes well in the MAC championships.