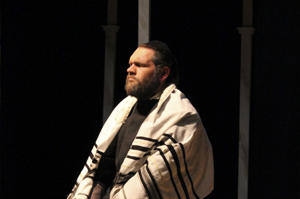 The Shakespearean tragic comedy tells the tale of the merchant Antonio who funds the quest of his friend Bassanio to win the heart of Portia by taking a loan from his longtime enemy, Shylock. If Antonio is unable to pay his debt to Shylock, he will take a pound of his flesh. The play addresses the issues of anti-Semitism, racism and discrimination.

“It’s a challenging piece about racism and its dehumanizing effects, while at the same time it’s a comedy about love and the lengths people are willing to go be with that special person,” said Chris Bizhub, a UA actor who played the role of Shylock.

“It’s an important piece, as there is no clear hero or villain,” he said. “It’s a case of desperate times call for desperate measures’ where every character does good and evil and human nature is challenged.”

According to Bizhub, Shylock is a Jewish businessman living in a time where Christian oppression of the Jews is rampant and legal. He lives in a time where he must wear a red hat at all times to let others know that he is a Jew. He is forced to live in a ghetto, which he must return to before nightfall every day. He is spat on, kicked and called a dog by Christians constantly. Yet, he remains proud of his family, his culture and his heritage.

“I think of him as a camel being overloaded with weight; he tries with all his might to carry it all every day of his life, but unfortunately for Shylock, in the play we see the straw that the breaks the camel’s back,” Bizhub said.

Bizhub explained that both he and UA director Aubrey Caldwell wanted the role of Shylock to be played in a different light. According to Bizhub, the character of Shylock was written during a time when anti-Semitism was more prevalent and acceptable. The character has the potential to be performed in a very stereotypical way.

“Aubrey and I wanted very much to have him played in a very human, sympathetic way,” Bizhub said. “Walking the line between humanity and stereotype has been difficult, but through research, classes, attending temple services and multiple exercises that forced me to put myself in Shylock’s shoes as much as possible, I feel confident that I am playing Shylock with as much humanity as I can muster and my talents will allow.”

After seeing Bizhub’s portrayal of Shylock, it will be difficult to imagine seeing anyone else playing this role. Bizhub was the full embodiment of this character. He demonstrated and seemed to embrace an understanding of Jewish culture. This actor put his heart and soul into his role and it was certainly evident in Act III scene I when he delivered his infamous speech.

Through Bizhub’s powerful delivery of the infamous speech, one cannot help but emphasize with his character. Bizhub was so passionate and convincing at this moment during the play. His performance alone should not be missed.

The talent featured in this play is arguably one of the best casts to premier at UA.

Alex Funk, a UA actor featured in the production, plays the role of Antonio.

“The fresh acting stands out in this production. We all come from different backgrounds and we all work amazingly well together,” Funk said.

The audience can expect to see some new faces on the stage. Benjamin Smith and Dean Coutris were brilliant additions to the productions. This was Smith’s first production, but one would never know. He was certainly a scene-stealer and hopefully audience members will be seeing a lot more of him on UA’s stage. Courtis will be bound to have female audience members smitten over his portrayal of Lord Bassanio.

UA’s Rosylin Jentner, playing the role of Portia, and Courtis have a beautiful chemistry.  Watching their love story come to life onstage is truly a magical experience.

“When he walked into auditions I thought, ‘There is my Bassanio,’ and when he spoke I knew he was my Bassanio,” UA director Aubrey Caldwell said.

“The Merchant of Venice” is Caldwell’s first directing experience at the university, but Caldwell is no stranger to the Akron theater scene. She acts and directs at Actors’ Summit Theater and also is an instructor at the Weathervane Playhouse.

“My first directing experience at The University of Akron has been an extremely pleasant one,” she said. “I have been blessed with a very talented cast and an amazing crew. It has been a pleasant collaborative process with designers as well as crew and cast alike.”

“I want people to think about how their actions can affect other people,” she said. “I don’t think people realize that we discriminate more often than we think we do. I bet if you would be honest with yourself you would find that you discriminate every single day, even though we make a cautious effort not to.

Caldwell has become very popular with the theater students at UA.

“Aubrey is a very passionate director who cares as much about the people involved in the show as the show itself,” said assistant stage manager Jim Bricker. “She is a breath of fresh air in the theatre department.”

“The Merchant of Venice” opens tonight at Sandefur Theatre. Performances will run Feb. 23-25 and March 1-3 at 8 p.m. and Feb. 26 at 2 p.m. Talk-backs will follow the performances on Feb. 23 and March 1. Sandefur Theatre in Guzzetta Hall is located at 157 University Ave., across from E.J. Thomas Hall on the UA campus.