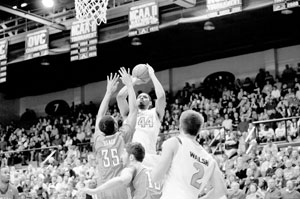 Thirty-nine minutes and 59 seconds. That is how long it took Akron to take the lead on Bowling Green on Jan. 11, as the Zips escaped with a 56-55 victory.

“It was one of those games where we were on the verge of getting them out of the building and we never did,” said Akron Head Coach Keith Dambrot. “That can become a potential problem.”

Wednesday’s matchup did not require a last-second floater by Zips’ forward Nick Harney as did the first, but it was hardly a cakewalk for Dambrot and company.

Bowling Green hung tough, trailing by just three as the clock ticked under two minutes to play, but the Zips got easy buckets down the stretch due to great distribution of the basketball.

With the score at 67-64, Nik Cvetinovic found Brian Walsh cutting to the basket, who finished with his left hand to make it a two-possession game. The next time down the floor, Alex Abreu found Demetrius Treadwell, again on the left side of the bucket, who finished the easy two.

The layup gave Akron a 71-64 lead with 58 seconds remaining, allowing the Zips to cruise to the 11-point win.

“I think we are confident we can win,” Dambrot said. “Even when we clutched up…we made a play.”

UA tallied 19 assists for the game, two below their season high, as 13 dimes allowed the Zips to shoot 20-of-33 from the field in the first half. The Falcons kept in the game with an impressive shooting performance themselves, knocking down 17-of-31 shots in the half.

The second 20 minutes was a different story, with Bowling Green putting up 34 shots to Akron’s 17. Luckily for the Zips, only 12 fell for the Falcons (35 percent), and their eight made buckets were coupled with an 18-of-20 performance from the free-throw line.

The victory gives Akron a seventh straight season of 20-plus wins, one of only 12 Division I programs to do so over that span (out of 345 teams)

Keith Dambrot’s squad has now won 17 of their last 20 games after starting the year 3-5.

“I know it’s a different team than we have ever had before,” Dambrot said. “We have never had a team that’s 12-1 in the league.”

Ohio’s 88-77 victory over Buffalo allowed Akron to clinch at least a share of the MAC East crown on Wednesday night. The Zips’ one conference loss is three less than any other team in the conference.