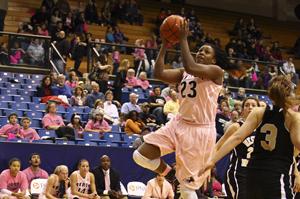 Akron trailed by seven points with just a minute to play, but was able to cut the lead down to one with 20 seconds remaining in the game. The Zips attempted three shots from beyond the arc, but were unable to land one in the effort.

The game started with the two teams exchanging blows. Kent State got on the board first with a three-pointer by Itziar Llobet, but Zip sophomore Sina King responded quickly with a three of her own. The squads battled back and forth for much of the first 10 minutes of the game before the Golden Flashes produced a bit of a run.

Kent State pushed the lead to six points with about four minutes to play in the half before Akron had an 8-0 run of their own. Kent State battled back at the end of the first half and took a 34-30 lead into the break.

Throughout the second half, things were not looking up for the Zips. At one point facing a deficit of 15, the Zips were more than on the ropes. However, because of gritty defense and clutch offense, Akron worked their way back and faced a four-point hole with just two minutes to play.

The task became even tougher when Itziar sunk another three that put her team up by seven points. Two free throws by Kent’s Jamie Hutcheson restored the seven-point lead for the Flashes with 58 seconds to play.

What transpired next had the entire MAC Center standing and shaking.

Akron’s sophomore point guard Kacie Cassell took the ball and converted on a layup attempt and was fouled on the play. She missed her attempt, but the Zips came up with an offensive rebound.

Next, Akron’s Carly Young was sent to the free throw line when she was fouled. She made her first but missed her second. Again, Akron claimed the rebound and this time found wide open three-point specialist Taylor Ruper, who knocked down the three to cut the lead to one. Within 30 seconds, Akron had made the contest a one-possession game.

Akron was forced to foul Hutcheson due to only having 27 seconds left in the game. Hutcheson stepped to the line and missed the first of a one-and-one.

With 10 seconds remaining, the Zips ran down the loose ball, saved it before going out-of-bounds and found Ruper for one last three-point attempt. This one was closer than the other two, as it was on line, but fell just a bit short.

The loss has a negative effect on Akron in the standings. Akron, who is on a three-game losing streak, started the weekend in sixth place, but has fallen to seventh and will have to win their final game if they want to ensure themselves a home playoff game in the Mid-American Conference Tournament.

Akron will finish the regular season on Tuesday night when they face last place Buffalo at James A. Rhodes Arena. In their last meeting in January, the Zips beat the Bulls 91-82.