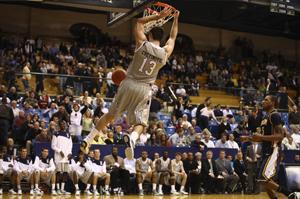 The Bobcats never let the Zips get into the game, holding a double-digit lead for the last 27 minutes, as they shot 57 percent for the night (30-of-53). OU’s 85 points were the most given up by UA all season.

Contrary to Ohio’s offensive outburst, Akron struggled from the field all game long, hitting only 16-of-49 shots (33 percent). The 16 made buckets tied a season low.

OU got out to a quick start, jumping to a 17-7 lead as the clock ticked less than 12 minutes to go in the first half. The Bobcats did not look back, building a 46-27 halftime lead.

The second 20 minutes did not look any prettier for Keith Dambrot, as his squad fell behind by 33 at one point (79-46), which allowed Ohio to coast to the 24-point win.

Akron was led by sophomore guard Brian Walsh, who poured in 12 on the night. Nik Cvetinovic (11 points) was the only other Zip to reach double figures.

The Zips struggled controlling the ball, as only seven team assists were overshadowed by 16 turnovers. Ohio’s 14 turnovers were coupled with 22 assists.

Dambrot and company will have two more chances to lock up the No. 1 seed. Wednesday they will host Buffalo, who beat the Zips 82-70 on Jan. 18. The game will also play as Senior Day for Brett McClanahan, Kyle Peterson and Nik Cvetinovic. Tipoff is set for 7 p.m.

Friday, the Zips will take the short trip to Kent, ending the regular season with a matchup against the Golden Flashes. The game’s 7 p.m. tipoff will be featured on ESPN2.