To celebrate the convergence of UA’s College of Creative and Professional Arts into the Buchtel College of Arts and Sciences, the documentary “Connected” will be shown in the Student Union Theater. 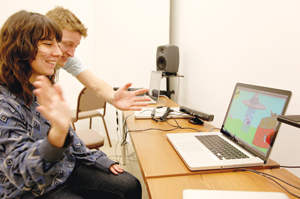 “This film stimulates you to get off your toosh and be a part of something bigger than yourself,” said Dr. Susan Speers, UA theater instructor. “All of our students are going to have to learn how to apply their degrees in many other areas outside of their specialty.”

According to Speers, the film will show students how to do just that.

According to connectedthefilm.com, the documentary “Connected” explores the film director’s, Tiffany Shlain, love-hate relationship with technology. The film unfolds during a year in which technology and science literally become a matter of life and death for the director.

As Shlain’s father battles brain cancer and she confronts a high-risk pregnancy, her very understanding of connection is challenged. Shlain reveals the surprising ties that link us not only to the people we love, but also to the world at large. “Connected” explores how, after centuries of declaring our independence, it may be time for us to declare our interdependence instead.

Convergence is shown further on March 6 through Dr. Eunsu Kang of UA’s New Media Program. Her students will showcase their work with the new Kinect sensor and interactive games from 12:30 to 2:30 p.m. at the Student Union Theater.

Kang’s students are showing their in-progress creative practices of using the Kinect sensor and interactive technologies.  According to Kang, this is a state-of-the-art practice reflecting very current flow of new media field.

“My students are front-liners in terms of new media curriculum and digital culture exploration,” Kang said.

The Kinect sensor is a motion sensing input device with video camera and infrared projector that has originally come out as a part of XBOX game console. People in the digital art community, media artists and creative coders quickly adapted the sensor to their work (not using the XBOX), and it is one of the most popular devices in the field now, according to Kang.

“I think this presentation is meaningful because it will show what our students are doing, how up-to-date curriculum they are exploring, and also as a proof of interdisciplinary study (art and technology) happening at our university,” Kang said.

Kang hopes that the convergence of UA’s College of Creative and Professional Arts into the Buchtel Arts and Sciences will “encourage more interdisciplinary study among students and interdisciplinary research among faculty members. “  Kang also said, though, that “we will need to make new policies and a system that proactively supports cross disciplinary attempts.”