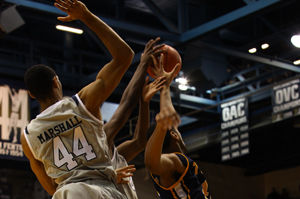 The win would have locked up the No. 1 seed for UA in the MAC Tournament. Instead, the Zips will have to travel to Kent on Friday night in hopes to take home the regular season crown.

“I knew the last three (games) were going to be tough,” said Akron Head Coach Keith Dambrot. “Just because you have a lead doesn’t mean you’re going to win this thing.”

After a four-point Zips lead at the half (38-34), the Bulls put together an 11-2 run to start the second 20 minutes. UB would never trail from that point, but Akron stayed in the game, never letting the lead get above six.

Buffalo led 68-62 as the clocked ticked under three minutes, but a 5-0 run for UA, highlighted by an Alex Abreu three-ball, cut the deficit to 68-67.

“I didn’t think we were great, but we gutted up,” Dambrot said. “I thought we battled back.”

After two free throws made by the Bulls’ Tony Watson II with 54 seconds remaining, Akron’s Brett McClanahan let a three-point shot fly to tie the game at 70, but it fell well short.

The Zips were then forced to foul. Watson would make four more clutch free throws down the stretch to give Buffalo the four-point win.

The junior’s 14 points and late-game free throws played as part of a trio that gave the Zips trouble all night. Senior Mitchell Watt led the Bulls and all scorers with 22 points on 11-of-15 shooting. Sophomore Javon McCrea chipped in 13 points on 6-of-11 shooting.

“We caught a tough performance from Mitch Watt,” Dambrot said.

Together, the combination of Watt, Watson and McCrea shot almost 65 percent from the field (20-of-31).

Akron was led by Abreu, whose 18 points went along with six assists and four rebounds. Brian Walsh, Nik Cvetinovic, Zeke Marshall and Demetrius Treadwell joined the sophomore in double figures

The loss was the first of the season for the Zips hosting a MAC opponent (7-1).

Friday’s game with Kent will be broadcast on ESPN2. Tipoff is set for 7 p.m.