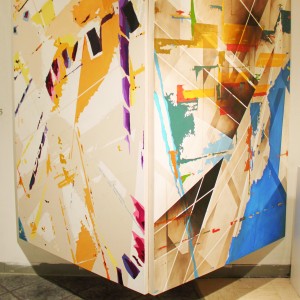 This challenge can create very interesting, unique displays, and this year, with a staggering number of entries, many students had to think beyond the traditional, salon-style display to find a way to fabricate space.

While some students only displayed a single series of paintings or even just a single sculpture, others showed a breadth of work that included multiple disciplines, such as Sarah Ellis’s display, which included painting, sculpture, printmaking and drawing work.

Some students hung all of their work on the walls.  Others, such as Dave Shonk, chose to display smaller pieces in books (a clever way to include more work.)

“A large part of the competition is to see how students work with obstacles in the exhibition area, such as light switches and limited space,” said Katie Timperio, manager of student affairs at the Myers School of Art. “There are some really creative and inventive solutions this year.”

One of the most dynamic setups was that of painter Nate Mayfield, who, upon realizing that his two enormous paintings could not fit in his allotted space, built a support so that the paintings would hang off the walls and meet in the middle at an angle. This transformed his whole space and paintings into a sculptural, architectural piece, which mirrored the architectural forms in his work.

The show was judged last week by the full-time faculty of Myers, and students took their work down this weekend and now are left to wait in anticipation of the results, which will be announced on April 23.