Twenty-nine states in the country make it legally admissible to hire and fire individuals based on the assumption of their orientation. For Joe Bertolino and Bil Leipold, institutional oppression is just one example of why it is more difficult for them to live in society.

You see, “Bil and I are boyfriends,” Bertolino said.

The University of Akron played host to partners Bertolino and Leipold last night, who presented their program “When the Gays Move into Mr. Rogers’s Neighborhood,” an interactive, comical approach to combat homophobia and raise awareness of the heterosexual privilege present in society in the hopes that once people gain experience, perspectives toward the lesbian, gay, bisexual, tr 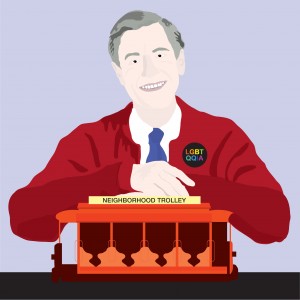 “The best remedy of our fear of diversity is humor,” Bertolino said.

The program aims to educate about diversity while providing students the tools for embracing diversity and combating heterosexism, or the discrimination of same-sex couples in society, according to Bertolino and Leipold’s website, joeandbil.com.

While the two are both in higher education, began their careers in student affairs and were fraternity men, they shared that there is “no such thing as an expert” on LGBTQQIA.

“We don’t know everything…we’re here to share a perspective,” they said.

What they wanted their audience to learn is that they have control to change existing stereotypes and discrimination, and not only toward those with a different sexual orientation. According to the couple, we can identify our own oppressive attitudes and try to learn as much as we can in order to change any false or inaccurate beliefs.

They began the program by having the audience list the source of our stereotypes. Arriving at the list of media, family, personal experiences, peers, education, religion, government and employers, “family is the only one you don’t have a choice in,” Leipold said, showing that we may accept or decline stereotypes through our own free will.

“Words matter,” was the conclusion the men arrived at. The first group of words differed drastically from the second. Why classify people based on whom they sleep with and engage in the bedroom, Leipold asked, albeit he worded it more explicitly.

Their approach to diversity education, while primarily a comedy skit, does share tense moments, as the two men share their experiences of coming out in various degrees of acceptance from their peers, their families and themselves.

“We think our relationship means something,” Bertolino said. The couple, who will be celebrating their 19th anniversary together, said they do not want any “special rights,” dispelling what others may think to be the LGBTQQIA agenda. “We just want equal rights.”

Through their program, the couple wants to encourage discussion on the topic.

“Engaging in conversation is important,” they said.

The program was sponsored by The University of Akron’s Zips Programming Network.