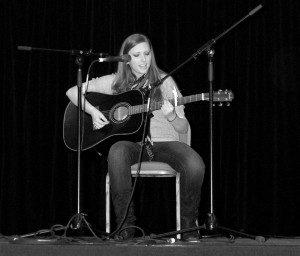 Technical difficulties were strewn throughout the evening’s program, which caused bumpy transitions from one act to the next, leading to a disconnected of the audience.

Of the 17 acts, 12 were singers. Although there were some cookie-cutter acts, there were some rather interesting vocal performances. Secret Crunch, a duo of graduate students, sang Irish folk music and UA Junior Tibor Gal introduced us to Chinese pop music.

“It was nice to hear music that I am not familiar with because then I have no biases towards the performer,” UA sophomore Julie Coore said.

The night would not be true to “American’s Got Talent” if dance crews had not been present. Among the dance groups were the favorites “Almost There” and “Akron Dance GuROOs.”

“Almost there,” a group composed of radiology students, wowed the crowd with their mechanic moves and breakdancing. “Akron Dance GuROOs” was the largest act to perform during the night. The pre-medicine dance group lightened up the mood to end the night on a fantastic note, despite a few of the dancers falling off the stage and knocking down the backdrop. There were no injuries, and the show went on.

Stars of the evening included UA junior Jeilee Letcher with the flawless delivery of an original and graphic poem “Freedom.” The piece addressed the dangers of premeditated self-violence, and the middle ground between depression and the breaking point.

Freshman Maria Moore captivated the crowd with a sequence of River Dancing. River Dancing is not an art you see very often, and among the mediocre singers, this act brought originality and real talent back into the program.

Although there were several unforgettable acts, there were a few that we wished we could rid from our memory for good. However, that is the beauty of talent searches: either you have it or you don’t.

Some acts made the students feel slightly uncomfortable, such as Shawn Better & Space Age. The rapper announced that he had just signed a record deal with a producer in Cleveland. However, the crowd found that difficult to believe after the mediocre and, at times, vulgar performance.

UA freshmen Sara Connley and Alexis Hamp said, “It was so awkward. I didn’t even know what to do with myself.”

Another singer received a similar reaction with her acoustic song choice regarding male dominance and social criticisms. The tension in the room was high when she left the stage murmuring sarcastic comments about the audience.

The dance crews were by far the audience’s favorite, with the Akron Dance GuROOs snatching the first prize and $25 Target gift cards. Almost There was the runner-up.

The winner selected by the judges was River Dancer Moore. Her prize included a Kodak Digital Camera and custom Dr. Dre headphones.

According to ZPN Fine Arts and Film Lecture Chair Helen Dauka, Moore will also have a chance to perform at Springfest.