May 4 protester speaks at UA

Learning from the oral history of a Kent State protester was accomplished in the Honors College common room March 8 through the graphic photography of the historic shooting on May 4, 1970. Unlike the traditional historical lectures on the events surrounding the May 4 tragedy, speaker Alan Canfora had a perspective uniquely tailored to the topic. 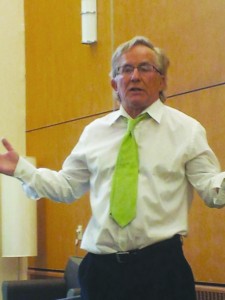 After listing his various credentials, including director of the Kent May Fourth Center and chairman of the Barberton Democratic Party, Canfora stated the most unique of all in modestly saying, “I am the leading expert on Kent State…I was there.”

Canfora was a student protester at Kent State University and was one of 13 individuals shot that day, four of whom died on that day.

Canfora was a student at Kent State in 1970 when the students began a peaceful protest against the American conflict in both Vietnam and Cambodia. The protest turned from a peaceful rally into an historic scene of death and terror, producing iconic images of the anti-war movement that still hold their power in modern society.

Of the various students present there, Canfora stated that he was actually a protester. Canfora began the lecture by distinguishing between innocent bystanders and protesters.

A common misconception has existed in the past that everyone on Kent State’s campus that spring day was there to cause trouble and protest violently. Canfora wanted his audience to know that many of those present were not active protesters, including two of the four students who were shot and killed that day.

Being a surviving victim, Canfora searched for answers about what actually happened at Kent State. At the conclusion of the civil trials occurring after the Kent State tragedy, all photographs and audio recordings taken on the campus were sent to archives at Yale. In 2006, Canfora decided to begin his search for additional answers about the events of that day by visiting Yale.

Canfora found a treasure trove of photographs that had been taken that day. The photographs told a different story from the one the media told. In their graphic nature, the photographs showed the audience members the step-by-step progress of the National Guard’s movements as well as the movement of the protesters. There were 2,000 pictures taken on May 4 from just outside Kent’s Taylor Hall, Canfora said.

Canfora spoke of the importance of showing these photographs, saying that to omit them would be to “sanitize the reality of what really happened.” Aided by the images, Canfora narrated the events both leading up to and occurring on May 4, 1970.  The attitudes of the students gathered on Kent State’s campus were frozen in the images, showing a clear contradiction to the claim that protesters threatened the safety of the National Guard members.

Canfora stated the exact distances of the protesters from the Guard, at some points being approximately 500 feet, as recorded by the FBI.

The images show not only the students, but also the movements of the National Guard as they progress up a hill and toward a parking lot, where many of the bullets rained down once shots were fired.  Canfora spoke of how the movements of the Guard up the hill in pursuit of the students looked as though “the National Guard was on a hunting expedition seeking human prey.”

Those gathered for what Canfora stated was meant to be “maybe a five minute rally” were laughing and smiling, without concern.

“We had no idea that 24 minutes after these pictures were taken that four would be dead and nine bleeding,” Canfora said.

He pointed out friends and spoke of victims as classmates, not just as names on a report. This brought the audience into the situation, and made the story of something that occurred on a campus only a few miles away from The University of Akron relatable. The victims of that day were concerned and in some cases angry college students.

Canfora himself discussed why he was an angry protestor that day. He was feeling a lot of anger and despair at the time, which was amplified by the death of a friend in Vietnam. The anger that came with the burial of a victim of the war was something that Canfora wanted to express through protest.

He stated that he and his friends decided “the next time we get an opportunity we will send a message to President Nixon.”

This sparked his decision to make two black flags, symbols of anarchy, to wave at the Kent State protest.

“We were feeling anarchistic on that day,” Canfora said. The freedom to wave that flag, which Canfora was photographed waving in front of the National Guard prior to the shooting, seemed to embody the American spirit and a young person’s freedom of speech.

“I still believe people have a right in a time of crisis to stand up and fight,” he said.

The photograph collection that Canfora showed not only included images captured before the shooting, but also during the 13 seconds of shooting, as well as the aftermath.  Images were frozen on the projector screen of the dozen members of the National Guard belonging to Troop G all turning together and kneeling to take aim at several of the more radical protesters, like Canfora himself.

Canfora claimed that the National Guard members who had fired had picked the targets before the order to fire was ever given. Students yelling or flipping the Guard off were the targets.  These same targets were seen again in photographs taken in the hospital, four of them, specifically, in the morgue. The images of the four dead in Ohio were very graphic in nature and were not the typical smiling high school portraits shown of the victims. Instead, the wounds were open and the bodies splayed out with no pretense present.

Student dormitories were clearly seen in several photographs in a very close proximity to the site of the shooting. Canfora pointed out one window specifically and told how, from this window, an audio recording was taken.  This recording, now referred to as the Strubbe tape, was taken by a student who felt he was recording history in the making.  Canfora found this recording in his research at Yale.  The missing piece of the puzzle, the controversial order to fire by the National Guard, was heard by Canfora on the digitized copy of this recording.  Canfora stated that the order is clear on the recording and that it was never before digitized before his discovery. Canfora said that a professional sound analyst also agrees on the presence in the recording of an order to fire.

The photographs record the members of the 12-man Troop G turn, shoot and continue to fire.

“I assert that this cannot happen without an order,” Canfora said.

Canfora placed great emphasis on the point that the renewal of this investigation is not to persecute members of the National Guard but instead to give peace and answers to all involved.

“At this late day we don’t seek to put them in jail,” he said. “We just want the truth.”

He pointed out that many members of the Guard had only joined to avoid being drafted into the war in Vietnam.  This common ground between protester and National Guard member is one he wanted to emphasize throughout his lecture.

Canfora left his audience with the hope that they could learn from the tragic day that gave him a scar from the bullet that passed through his right wrist.  “Wherever you have a tragedy, you can learn from it,” Canfora said.  The lesson lives on through the images and audio recordings and through stories from survivors like Alan Canfora.