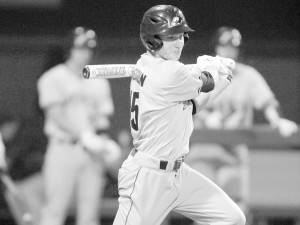 The University of Akron baseball team went 1-1 in a doubleheader against the West Virginia Mountaineers Tuesday.

Senior left-handed pitcher Scott Fisher started off for Akron on the mound, seeing a total of 21 batters. Fisher threw for five innings, allowing only two runs, to give him his first win of the season.

Infielder Tyler Begun started the Zips off with a program-high third homerun of the season with a hit over the left field fence. Begun received two RBIs with mid-fielder Matt Rembielak reaching the plate.

In the top of the fourth inning, first baseman Samuel Trecaso, who scored the winning run in last season’s matchup against the Mountaineers, started the inning off with a double down the right field line.

Outfielder Kurt Gamby followed up with a single to center field, earning the RBI with Trecaso reaching the plate. Catcher Brady Stewart singled to center field, putting Gamby in scoring position.  Infielder Brandon Winter would sacrifice bunt to the pitcher, advancing both runners.

The Zips rallied again in the top of the sixth inning with Washington doubling down the right field line. Rembielak bunted, reaching first base on a fielder’s choice. Begun drove Rembielak home with a double to left field, and Watkins followed with a double down the left field line to put another run on the scoreboard with Begun reaching home.

Akron closed the seven-inning match up with Winter snagging the final RBI of the game with a single down the left line.

The Zips had a total of 13 hits for the game.

The tables turned at Hawley Field in the second game of the day, with Akron taking a 12-7 loss.

Akron returned strong at the plate, scoring runs in both the first and second innings.  Begun started things off with a single down the left field line, with Watkins following up with a double to center field. Trecaso grounded out to shortstop, earning the RBI with Begun scoring.

West Virginia countered in the bottom of the third inning with shortstop John Polonius hitting a three-run homerun.

The Mountaineers pounded at the plate for the duration of the game, scoring an additional nine runs.

Akron went down swinging, scoring two runs in the bottom of the ninth inning.

Washington started it off with a single to the right side. Rembielak walked on a 3-1 count, with Washington advancing to second base.  Outfielder Joey Havrilak singled to right field, putting runners in scoring position. Winter reached first base on a throwing error on a 1-2 count.

Rembielak and Washington would both score, but it wouldn’t be enough to close the Mountaineer gap.

Left-handed pitcher Matt Gebacz would earn the loss for Akron, pitching the first three innings of the game. Akron would send five more pitchers in during the duration of the game.

The 6-12 Zips will begin Mid-American Conference play in their home opener at Canal Park on Friday against the Ball State Cardinals. The teams will meet in matchups on Saturday and Sunday, both at 1 p.m.