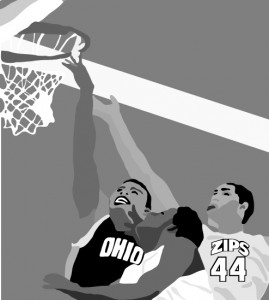 This March Madness season certainly has been living up to its name.  I bet it’s safe to say that the vast majority of everyone’s brackets has been completely busted by the small fact that two No. 2 seed teams were eliminated in the first round by 15th seeds, not to mention that Ohio University (13th seed) beat out the 4th seeded University of Michigan.

Upsets are part of the fun when it comes to bracketology, but I can’t help but remember the faithful upset that screwed the Akron Zips out of being one of the upset underdogs of this season.

If you didn’t watch the MAC championship game, I’ll give you a quick recap:  the Zips were up, then they were down, then they came back, got close to tying in the final minutes, got screwed by a bad call and then doubly screwed by a second bad call, finally losing the game.

I know that was an incredibly simple way to sum up the entire game, but it seriously was bad officiating that took this game away from us.

The first bad call was a charging call on our own Alex Abreu as he was passing the ball to Nick Cvetinovic, who shot a three-point to tie the game, or at least the game should have been tied if the officials had not called the charging foul.

I’ll be happy to admit that I don’t fully understand most fouls in basketball, but many offensive fouls seem to be a joke, as well as subjective.  Throughout the game there were numerous fouls on all sides of the ball that were not called, yet the officials decided to make a bad call that could cost the game.  Ridiculous.

The second bad call occurred with foul shots with three seconds left on the clock.  Ohio University was still up on Akron by three points and with three seconds, the Zips had two foul shots to make.  On the second shot, an Ohio University player jumped off the line and placed his hand onto the basket while the ball was still in the air. According to the rules of the NCAA, this is technical foul, called goaltending, which results in the basket being considered good and an additional foul shot being granted.

Zips fans were excited while watching the replays, because from each angle, you could clearly see that one of OU’s players had his hand on the rim.  After several minutes of watching replays, the officials announced that they were adding several tenths of a second to the clock and not calling the technical foul.

This is an outrage because, frankly, the referees stole the game away from Akron.  After the game, photos were published that clearly showed, with high resolution; the goal had been interfered with while the ball was in mid-air.

It is important to always take the official’s ruling as final, but it is clear that it was a bad call.  And the combination of two bad calls cost the Zips a run at the NCAA March Madness tournament.  To put it frankly, the officials robbed Akron of a Sweet Sixteen spot.