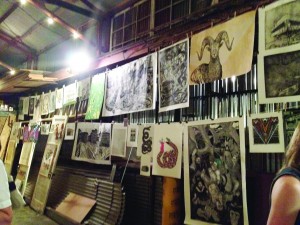 Eleven students from the Myer’s School of Art printmaking program travelled to New Orleans last Wednesday, some boarding planes from Akron/Canton, and others from New York City. But unlike many other spring breakers, they weren’t going to “The Big Easy” to party.

Instead, they were going to the Southern Graphics Council International Conference (SGCI), a large assemblage of printmakers from around the world.

This was the 40th annual conference, and the theme this year was “Navigating Currents.”

Although it may seem odd that artists were having a conference, these printmakers mean serious business (and Myers students are no exception).

“Attending the SGCI broadens students’ understanding of printmaking through their attendance of lectures, panel discussions, demonstrations, and exhibitions,” said Charles Beneke, a printmaking professor at UA. “It’s wonderful because they are exposed to so many possibilities that printmaking offers.”

From Wednesday to Saturday, working, professional, student and faculty artists all participated in lectures, workshops, group discussions, art exhibitions and critiques, all centered on the art of printmaking.

Big name artists such as Willie Cole, David Driesbach and Nikola López lectured on their work. Demonstrations on alternative methods of screen printing, innovations in stamp and stencil making and even methods as bizarre as screen printing on 16mm film were all available to visitors.

A good deal of the action took place in Tulane University, complete with a gallery that exhibited work by world-famous printmakers.

UA students, specifically the printmaking club, raised money for the trip by hosting various fundraisers, such as an art auction, as well as writing grant proposals.

“The opportunity to attend the conference is a major influence on those students who are able to participate,” said Nicolle Lukezic, president of printmaking club. “By participating in the variety of demonstrations, exhibitions, interactive activies, lectures, panel discussions and the free exchange of dialog about contemporary printmaking, students are able to expand their creativity in their work conceptually and visually.”

The conference was centered entirely on sharing ideas, whether a famous artist was giving a lecture, a student was showing a demo on a unique printmaking process, or even artists were simply trading and selling prints to each other.

The printmaking medium almost always results in multiples of whatever piece a person is making (which is one of the main features of printmaking), so artists are much more willing to trade and sell their work. Each UA student returned to Ohio with a myriad of prints from different artists that they had never met before.